Lynn Cortland Stoker died Sunday, March 4, 2012, at his home in White Bear Lake surrounded by his family. He was born April 23, 1927, in Montclair, N.J. He was the son of Harold Cortland Stoker and Marion Cox Stoker. 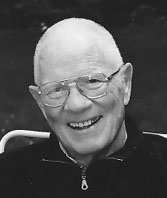 Lynn attended Montclair High School, where he played fullback on the 1944 New Jersey State High School Championship football team. Upon graduation from high school in May of 1945 he enlisted in the U.S. Coast Guard and served on the USS Orange, a patrol frigate, in the Pacific Theater at the end of World War II.

After his honorable discharge in July 1946 he enrolled at Syracuse University. He completed his undergraduate study in 1949. Then Lynn attended Yale University School of Medicine, graduating in 1953. He entered the Army Medical Corps and served an internship at Walter Reed Medical Center. In July 1954 he began his residency in surgery at Dartmouth Medical School and Hospitals. After serving as the chief surgical resident, he spent one year in research and then became the assistant chief of surgery for Dartmouth Medical School.

While he enjoyed his time at Dartmouth, Lynn desired to work in a traditional, community-based medical practice. This brought him and his family to Albert Lea to work with a team of medical professionals at the Albert Lea Clinic, P.A. and Naeve Hospital. He practiced general surgery in Albert Lea from 1962 until he retired from practice in 1989.

Lynn loved his family first and foremost. He loved animals and had dogs as family members all his life. He was an avid fisherman. He was passionate about his beliefs, he remained intellectually curious about many things, and was an avid reader on diverse subjects. Through many personal health challenges, he rose to meet them with grace and good humor. He lived 84 years, not one of them as an old man.

In 1950, he married his Syracuse University classmate Betty Anderson. They had four children while in New Hampshire and raised them in Albert Lea.