Maxine Kuechenmeister, 86, of Wells, died Monday, March 12, 2012, at the Mayo Clinic Health System in Albert Lea. A Mass of Christian burial will be at 11 a.m. Friday at St. Casimir Catholic Church in Wells. Visitation will be from 10 to 11 a.m. and a Rosary Service will be at 9:45 a.m. all at St. Casimir Catholic Church today. The Rev. Thomas Niehaus will officiate and burial will take place in St. Casimir Cemetery in Wells. Bruss-Heitner Funeral Home in Wells is assisting the family with arrangements. 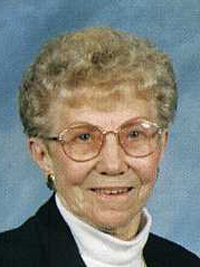 Maxine was born July 23, 1925, in Wells, the daughter of John and Elizabeth (Chirpich) Yainske. She attended rural school and St. Casimir Parochial School. She was a graduate of Freeborn High School, class of 1943. She married G. Thomas Kuechenmeister on April 15, 1948, at St. Casimir Catholic Church, by the Rev. Leon K. Hazinski.

She began employment with the Wells Mirror in 1952 as bookkeeper and in the printing and publishing of the weekly newspaper, beginning as a press feeder. She became co-owner of the newspaper with her husband on May 1, 1970. The newspaper was sold April 1, 1979. She was also employed by Wells Cable TV Inc. as bookkeeper and office manager from its initiation in 1976 until it was sold in August of 1986. She was a seasonal employee of California Packing Corp., Del Monte and Stokely USA until the plant closed at the end of the corn packing season in 1996.

Mrs. Kuechenmeister was a member of St. Casimir Catholic Church and its CCW, the St. Bernadette’s Circle No. 6, served as Monica of the church, the Women’s Catholic Order of Foresters and the Auxiliaries to the Wells American Legion and Veterans of Foreign Wars. She enjoyed walking, dancing, music, gardening, reading, embroidery and playing cards.

She was preceded in death by her parents; her husband on March 17, 2000; and two brothers: Marvin and Romuald Yainske.