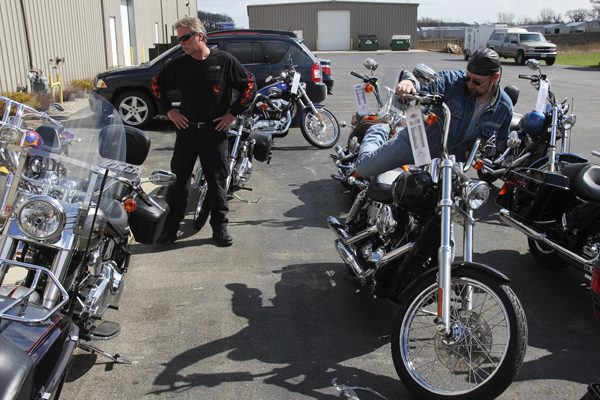 Motorcycle riders are heading out on the highway early this year.

Gordy Nelson with the Albert Lea chapter of HOG — short for Harley Owners Group — said bikers normally have to wait until the end of April, sometimes even the beginning of May. But unseasonably warm weather allowed them to be out in mid-March.

“All the bikers are super pumped about the weather,” said Kristin Bergdale of Bergdale Harley-Davidson in Albert Lea.

She said many riders have been in the dealership to consider new motorcycles or get new gear for the coming season, which is good for business.

Nelson said he put about 6,000 to 7,000 miles a year on his 1998 Harley-Davidson Softtail Custom, which has 63,000 miles on it. He said with an early spring it probably will be a year with more than the usual amount of miles.

He stopped at the dealer at noon Friday for coffee and to chat with other local riders.

The downside of warm weather is that the first death of a motorcyclist in Minnesota this year happened March 16. A 28-year-old man in Lake Elmo died after his motorcycle left the road and struck a tree.

Because of the early warm weather, the Minnesota Department of Public Safety is asking motorists to watch carefully for motorcycles — don’t just look for oncoming cars, look for any approaching vehicles including motorcycles and bicycles.

With the number of motorcycles and motorcyclists at record-high levels in Minnesota — almost 230,000 registered motorcycles and more than 404,000 licensed operators — rider training helps new riders earn a license and sharpens skills for returning and experienced riders. Course registration is available at motorcyclesafety.org for training at 31 locations from April through October. In the last five years, nearly 43,000 riders have taken a Minnesota Motorcycle Safety Center rider training course.

On Friday, longtime riders Dennis and Shirley Ballard of Amana, Iowa, stopped at Bergdale Harley-Davidson on their way to the Donnie Smith Motorcycle Show this weekend in St. Paul. Dennis said he has seen many riders out early this year, “especially old-timers.”

He said he was able to ride his motorcycle this winter on Christmas Eve and New Year’s Eve.