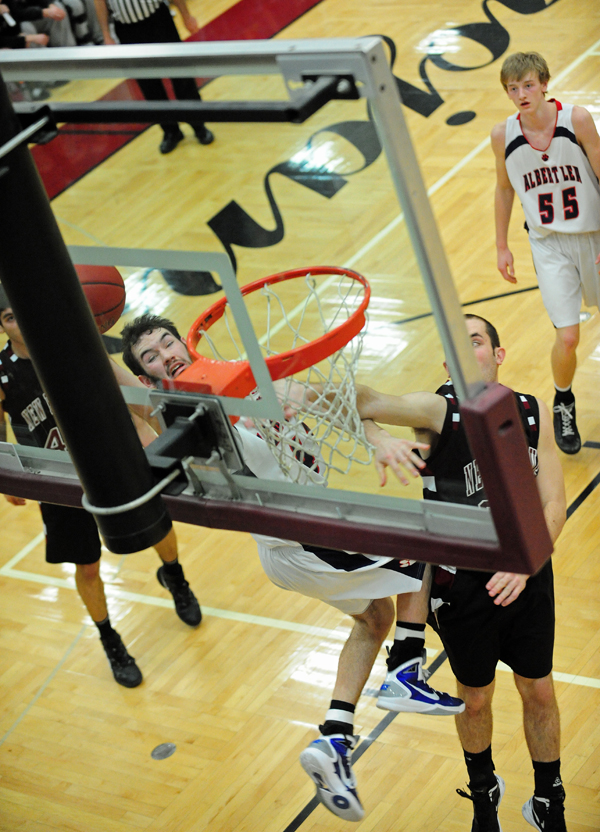 Albert Lea's Kyle Ooms rises for a layup on Saturday during the second half of an 85-59 loss to New Prague. Ooms had 19 points and finished third all-time in career scoring. -- Andrew Dyrdal

NEW PRAGUE — For the past five seasons, Albert Lea’s boys’ basketball team hasn’t been able to sneak past the New Prague Trojans in the postseason.

After losing to the Trojans (20-9) in the first round of the Section 1AAA Tournament four years in a row, the Tigers (8-19) earned another shot at New Prague — this time in the semifinals — after upsetting Kasson-Mantorville on Wednesday in the first round.

Looking to avenge a 32-point loss to the Missota Conference runner-up during the regular season, the Tigers rolled into New Prague on Saturday having won four of its past seven games and went blow for blow with the Trojans in the game’s opening minutes.

The Trojans held the Tigers to one field goal over the final eight minutes of the first half and knocked down three straight 3-pointers while riding a 23-2 run into the break. Spurred by Najera’s 21 first-half points, New Prague led 50-23 at the break and cruised to an 85-59 win and a showdown with Big Nine Conference champion Austin in the finals.

Kyle Ooms led the Tigers with 19 points and finished his career as the program’s third all-time leading scorer.

Albert Lea closed the season having played in its first section semifinal game since 2007 and with its most wins since 2006. Tigers coach Lucas Kreuscher said the team’s four seniors, who played their final game in cherry and blue, “improved” the program this season.

Ooms emerged from the locker room following the game with watery eyes and said he’ll miss playing with his teammates, a group he bonded with especially well this season.

“I love my team,” Ooms said. “I wouldn’t trade them for the world.”

The Trojans struck first in what looked like a shootout early with a baseline 3-pointer, one of six that would fall over the ensuing 13 minutes, and took a 6-3 lead when Trevor O’Brien hit another from the same spot in front of the Tigers’ bench.

Ooms answered with a play he’s patented during his career, scoring in traffic off an offensive rebound, but the Trojans’ Najera scored six straight points to extend the lead to 12-5 less than four minutes into the game.

Najera nearly singlehandedly outscored the Tigers during the first half as he scored 11 points in a three-minute stretch and 21 before the break.

“He’s one of those guys who has the ability to shoot the outside shot, but he can also take it to the rim,” said Ooms, who guarded Najera for most of the game. “It’s difficult to get out on him, he’s got a quick first step and he hit a lot of transition 3’s as well.”

The Trojans extended its lead to 21-11 before Ooms scored twice and assisted on a Dylan See-Rockers’ layup to pull the Tigers within 23-17. Ooms scored a reverse dunk moments later to hold the deficit at six, 27-21, with eight minutes left.

Then the Trojans took over.

Najera knocked down two 3’s and O’ Brien made one during an 11-0 run that was broken up only by Tigers senior Tyler Wichmann’s backdoor layup.

The Trojans closed the half on a 12-0 run, capped by Joe Kneip’s buzzer-beating layup, and led by as many as 34 points early in the second half.

Kreuscher questioned whether his players lost their energy during the Trojans’ run but said they didn’t contest the perimeter well enough when New Prague started making 3’s.

“That’s why New Prague has been good for so many years,” Kreuscher said. “They can get hot in a hurry and put you away in a hurry.”

After scoring 82 points against Kasson-Mantorville in the section opener, the Tigers managed just 23 first-half points against New Prague, but outscored the Trojans 36-35 in the second half.

Kreuscher said the Trojans’ hot shooting in the first half frustrated the Tigers, which moved the ball from sideline to sideline instead of toward the hoop, on offense.

“We got caught pushing everything around the 3-point line and the baseline,” he said. “We didn’t have enough cuts to the basket.”

Kreuscher called the group a “perfect example” of senior leadership on and off the court.

New Prague plays Austin for the Section 1AAA championship at 8 p.m. on Friday at the Rochester Civic Center. Austin beat Winona 78-46 in the semifinals.