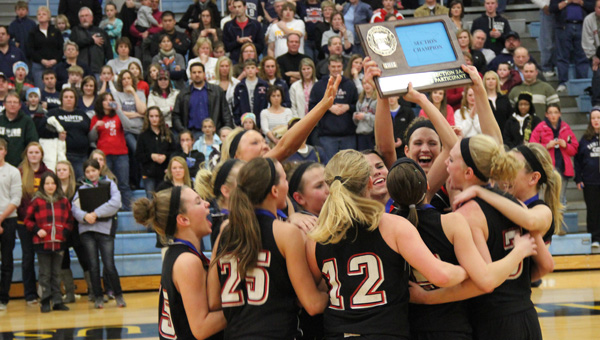 ST. PETER — It wasn’t pretty, but the New Richland-Hartland-Ellendale-Geneva girls’ basketball team got the job done. They beat St. Peter and are headed to the state tournament. 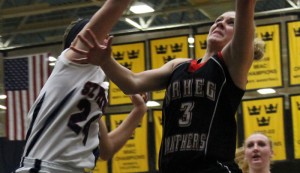 The 30-0 Panthers won by five points, 59-54, with sophomore guard Carlie Wagner posting 25 points, but with about 7 minutes left in the first half they were ahead by 23 points. They came out lightning hot while the Saints were tight and nervous. The Panthers slowed down their game near the end of the first half and offered up more around-the-perimeter passing than driving and dishing going into the second half. Also, with the referees calling a loose game, it became a real brawl between the two physical, determined teams. 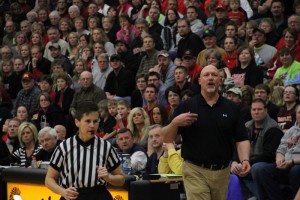 Even though the game was at Gustavus Adolphus College in St. Peter, there easily were more NRHEG fans than St. Peter fans at Gus Young Court in the Lund Center. They let the refs know when calls were questionable. NRHEG coach John Schultz earned a technical with 10 minutes left in the game for jawing at one of the officials.

As St. Peter whittled away at the NRHEG lead, eventually, the score became close, making the last five minutes of the game the most exciting and the most scrappy.

The Saints came within six points, then five, then the score hovered there until 1:40 left, when a 2-pointer from the Saints’ Katy Kuiper that was very nearly a 3-pointer made it 54-51, cutting NRHEG’s the closest since the start of the contest. 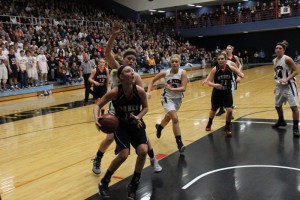 Katie Cole takes the ball strongly to the bucket Friday night at the Lund Center in St. Peter in a game against St. Peter. -- Tim Engstrom/Albert Lea Tribune

Wagner responded with a drive for a score. With 50 seconds left, with Kuiper made two free throws to make the score 57-53. NRHEG’s Jade Schultz sunk a jumper to make it 58-53. A free throw soon made it 58-54.

The NRHEG side of the gym erupted when Anna Schultz was called for a push with 14 seconds left. St. Peter missed the free throw, got a rebound, but then shot an airball for their school’s last hope. Wagner chased down a length-of-the-court in-bounds pass but was fouled on the layup attempt. A made free throw was the game’s final bucket.

Schultz said the team started the game making all the shots and shutting down the opponent. 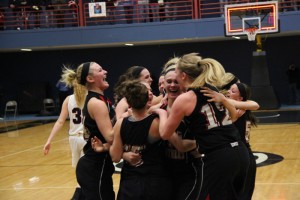 NRHEG players react with glee seconds after the clock ended with their team on top 58-51. -- Tim Engstrom/Albert Lea Tribune

“The kids came out unconscious,” he said.

The game slowed down because the Panthers were hoping to get the Saints out of their Diamond 1 zone defense, two Panthers were in foul trouble and opportunities were drying up.

“The girls came through as they have all year. Great balanced scoring,” he said.

Wagner said coach Schultz during a tight part of the game encouraged her to drive to the basket and kick out if no shot was available.

“Coach pulled me over and said, ‘You just go,” she said. 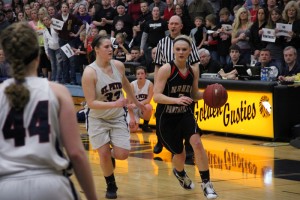 What helped them pull through, Wagner said, was how they have played as a team all season and know each other well. She said has never been to the Target Center and is looking forward to it. What’s it feel like to be going to state?

Schlaak, a senior, said it feels good to go to state, too. She said when she was a freshman the team lost to Blue Earth in the sectional final. This time, the NRHEG is cutting the net.

Schultz, the player, said all the hard work of the season has paid off. She said winning a ticket to state is the best feeling. 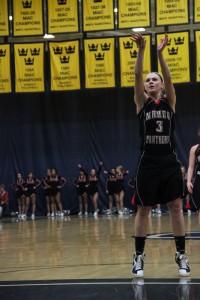 Carlie Wagner shoots a free throw in the first half of NRHEG's win over St. Peter to advance to the state tournament. -- Tim Engstrom/Albert Lea Tribune

“In the last five minutes we just told ourselves that we just want this more. We just have to fight our way out of this,” she said.