NRHEG staves off Hayfield with defense 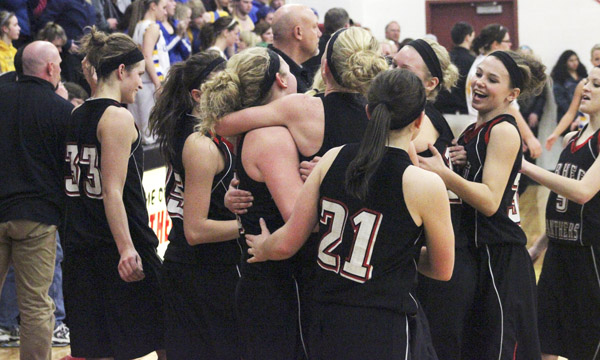 NRHEG players celebrate Friday after winning a game they had trailed at the half. -- Tim Engstrom/Albert Lea Tribune

NEW RICHLAND — It was run and gun versus slow and careful Friday night at New Richland-Hartland-Ellendale-Geneva High School. 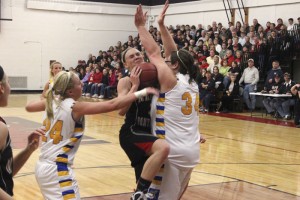 The undefeated Panthers girls’ basketball team staved off a challege from the Hayfield Vikings in sectional action Friday 45-32. For a team that isn’t used to close games, the Panthers trailed at halftime, 16-15.

Coach John Schultz said their shooting was way off until the end and they made no 3-pointers.

“They fought back in the second half,” he said, citing “adrenaline and guts” as what helped the Panthers win the game.

Anna Schlaak had 21 points. Carlie Wagner had 15. Defense proved crucial forcing the Vikings to turn the ball over 14 times. NRHEG turned the ball over five times. 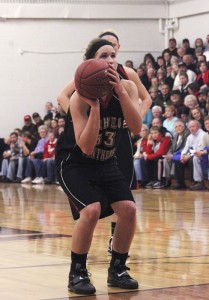 NRHEG senior Anna Schlaak shoots a free throw in the waning minutes of the game the Panthers had against the Hayfield Vikings. -- Tim Engstrom/Albert Lea Tribune

Hayfield played stall ball from the start. They passed on open shots to wait for the wide open looks. The game was scoreless the first 4 minutes and 38 seconds, until the Vikings canned two free throws. NRHEG tied it, then took a lead, but Hayfield clawed its way back. As the clock neared the halftime buzzer, Hayfield sophomore guard Dani Wagner nailed a jumper to take the lead by a point.

With 7 minutes 6 seconds left, after Vikings sophomore Jessie Foster put one in, Hayfield took the lead for the final time, but the Vikings kept it close. With 5:10 left, the score was 31-30. That’s when the Panthers finally began draining shots. Sophomore Hannah Lundberg prevented a turnover, then nailed a bucket that got the gym fired up, making the score 35-30. A Wagner jumper made it 37-31.

But the gym was the loudest with 2:37 left when Jade Schultz grabbed a long offensive rebound on the right side and shot it off the glass while being fouled, making it 40-32. 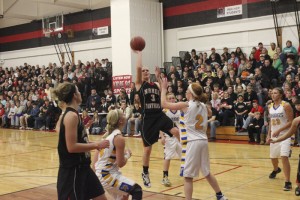 Finally, Hayfield couldn’t play the slow game anymore. With time running out, they had to hurry up. They had to play the game the way the Panthers wanted to — fast. Wagner kept driving. Schlaak kept picking up anything near her and putting the ball in. And she kept stealing the ball.

Wagner said defense was key to staying in the game.

“We had to go after every ball,” she said, getting after steals and rebounds.

The drives she had were tough, as the Vikings worked at not letting the Panthers get inside. Wagner said she drives anyway, knowing she can shoot, get fouled or kick the ball to the teammate.

The sophomore credited Schlaak, a senior, with winning the game. 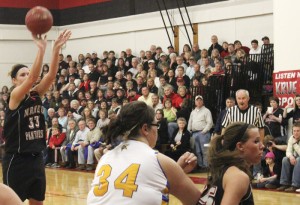 “We’ve all been out for the sport long enough that we know how to handle pressure,” Schlaak said.

She said the home crowd helped get the balls to start falling into the basket again.

The Panthers are the No. 1 seed in their section. They will play No. 3 seed Blue Earth Area at 8 p.m. Monday at Minnesota State University, Mankato. The Buccaneers defeated No. 2 Southland 71-68 in overtime Friday. On the other side the section, St. Peter will take on Kenyon-Wanamingo at 6 p.m. at MSU.

The winners of the two contests will meet at 8 p.m. Friday in St. Peter at Gustavus Adolphus College.

The Panthers started the sectionals last Tuesday by defeating Triton 56-35.