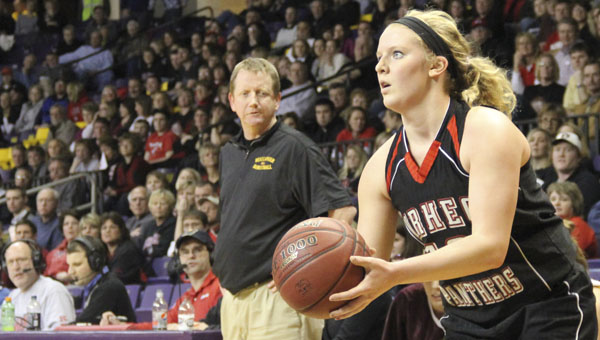 MANKATO — The undefeated New Richland-Hartland-Ellendale Geneva Panthers girls’ basketball team wasted no time jumping to the lead against Blue Earth, and they didn’t look back. 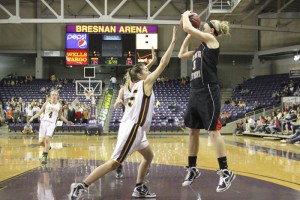 Carlie Wagner nails a contested jumper to give New Richland-Hartland-Ellendale-Geneva its first two points of the second half Monday during the team's victory over Blue Earth in Mankato. -- Tim Engstrom/Albert Lea Tribune

Wagner said they came out hustling and were attacking the ball on defense.

“Once we got the lead we kept the lead, so we didn’t have to play their game,” she said. 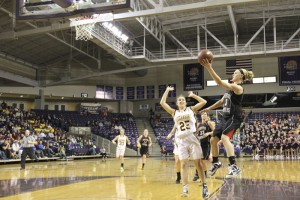 Blue Earth led 3-2 with 14 minutes left in the first half, but Wagner put NRHEG back on top and then the Panthers pulled away.

The tough defense caused Blue Earth to make bad passes and rush shots, particularly during a scoreless stint in the first half. They couldn’t slow the game down like Hayfield did last Friday. With 12:15 left, it was 9-3 NRHEG. By 7:41, it was 21-7. Finally, with 5 minutes left, the score was 26-10. Blue Earth had 18 turnovers to NRHEG’s 13, and NRHEG had 14 steals to Blue Earth’s six. 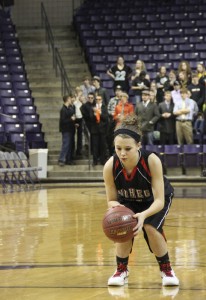 NRHEG seventh-grader Marnie Wagner bends her knees before shooting a free throw near the end of the team's victory over Blue Earth on Friday in Mankato. Wanger missed this one but made the prior free throw. -- Tim Engstrom/Albert Lea Tribune

The Panthers are now 29-0 and are the 2AA sub-sectional champions. In the sectional final at 8 p.m. Friday, they face St. Peter in St. Peter at Gustavus Adolphus College. St. Peter at Monday in Mankato defeated a young-but-aggressive Kenyon-Wanamingo squad 71-68 in overtime.

Schultz said she was able to hit the long shots because came out relaxed and eager to play. She was focused, she said, and hitting the first one helped with the others.

“Once you make one, it’s so much easier to think to yourself that you can do it,” she said.

NRHEG coach John Schultz said his team had gone two games struggling to hit their shots, but they came out Monday, hit shots, were tough on D and played their game.

“They got their balance back,” he said.

Schultz said he was glad to be able to get more players in. He said the “kids are starting to understand their roles.”

He said the last time NRHEG faced Blue Earth sophomore forward Krista Hassing hung 30 points on them. On Monday, she scored just nine, with only two in the second half.

“Carlie Wagner knifed through their defense all night, and Jade Schultz hit a number of 3’s to keep them honest,” the coach said. “Anna Schlaak was big on the boards again and Maddie Wagner gave us some very quality minutes and hit a crucial 3 in the second half.”

Schultz said NRHEG plans to bring its same uptempo style of play to the game against St. Peter.

Fans got to see two seventh-graders play Monday, but they weren’t in the game at the same time. They were Maddie and Marnie Wagner, twins who are the younger sisters of sophomore Carlie Wagner. Maddie canned a 3-pointer and Marine nailed a free throw. 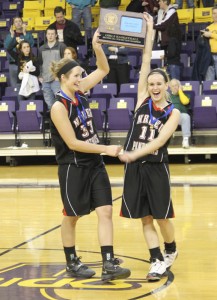 Carlie, by the way, said she has attracted the attention of college scouts, from teams such as Iowa State, Iowa, Kansas State and Minnesota, among others.