The Freeborn 4-H Club held its December meeting on Dec. 11. There were seven members and four parents present. President Matthew Chicos called the meeting to order and the pledges were recited. Roll call was: “What is your favorite kind of candy?” There was no secretary’s report. The treasurer’s report was given, and Sandy presented bills for the area cancer auction basket, flowers for the hospice garden, Christmas party gifts, Christmas party pizza and pop, history book supplies and for club awards from the November awards banquet. Motion was made, seconded and passed to pay these bills.

Sandy welcomed the newest family to the club, Jennifer and James Bye from Matawan. Monica Bye is a junior in high school this year. 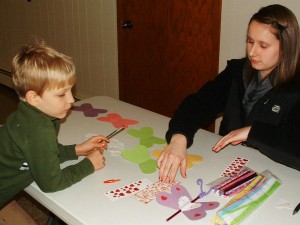 The Hayward 4-H Club made crafts at its February meeting. -- Submitted photo

Old business consisted of Sandy talking about enrollments. All enrollments needed to be completed by Jan. 15. Sandy handed out instructions for enrollment to the new members.

New business started out with Sandy handing out folders that contain information for the club. The club directory, meeting dates and times, which family is on the lunch committee for the month and also a list of the club officers, adult leaders, junior leaders and what projects they are responsible for.

The group started discussing what Community Pride projects they want to do for this year. The group wants to sell red geraniums again this spring. Also delivering cookies to the elderly and the annual food drive for the Alden area food shelf were discussed. The group would be doing the food drive on March 10 and delivering cookies to the elderly in April. After delivering the food to the Alden area food shelf, club members and leaders will go bowling in Albert Lea.

Sandy announced that if anyone wanted to participate in BLU this year, the sign up deadline was Dec. 20 and is for youth in grades 6 through 13.

Share the Fun will be held on Feb. 26. If anyone is interested in being in Share the Fun, they will need to be signed up by Jan. 23. It was decided that as a club the group would not be participating.

With no other business, the group proceeded with having its Christmas party. They played the Dice Double game. It is a game that is always enjoyed each year. Many prizes were won by each member. While the pizza was cooking, Christmas crafts were made by the members. Then they enjoyed pizza and pop that was furnished by the club. Each family brought a treat to share.

The next meeting would be at 5 p.m. Jan. 22 at the Freeborn Legion Hall.

The Freeborn 4-H Club met for its February meeting on Feb. 18 at the Freeborn American Legion Hall. President Matthew Chicos called the meeting to order. The American flag pledge and 4-H pledge were recited.

The secretary and treasurer’s reports were given and approved as read. Sandy handed out the Belgian Waffle breakfast tickets for members to sell in advance. The breakfast is March 31 at the Freeborn County Fairgrounds, serving from 7:30 a.m. to noon. New this year is a silent auction. The club is making up a basket to donate. At the meeting members made a tie blanket and this will go into the basket. Sandy and Chris Anderson will select the other items to complete the basket.

The club will be selling red geraniums again this year. Sandy handed out advance order forms to each family. The cost will be $5 per plant. The club has 125 plants on order. They will deliver them either the last week in April or first week in May.

The next meeting was scheduled for March 10, when the group will be having its annual food drive to benefit the Alden area food shelf. They will begin the day with their meeting at 9 a.m. Members would then go door-to-door to collect. The group will be sorting and boxing up the food and take it to the Alden area food shelf. From there the club would proceed to the Holiday Lanes bowling alley in Albert Lea for a couple of hours of bowling, pizza, pop and fun.

Szymanski gave a demonstration on origami or paper folding. Members all got to try their hand on making a dog or cat and a “cootie catcher.” The Szymanski family provided lunch.

The next meeting would be at 9 a.m. March 10 at the Freeborn American Legion Hall.

The group received a thank you from the Veteran’s Administration in Minneapolis thanking the unit for the lap robes, heart pillows and comfort kits that they had received from the group.

A discussion was held about the outcome of the Soup N’ Pie that was held in January. The number of people attending was down from last year but a profit was still made and it will be held again next January.

Anderson read part of the newsletter from the department concerning the gift shop at Christmas time. The information as to how many were able to give/receive a gift was interesting.

There will be no sewing date in March for the Community Sewing Group. Possibly the next one will be in April. Krogsgaard reported that the lap robes, heart pillows and comfort kits had been sent up to the Veteran’s Administration in Minneapolis. The quilts will be going to the Salvation Army to be given to families in need.

Anderson announced that at the March meeting, the group would be filling out the annual reports. It is time to gather up hours and information.

The chairwoman for the Girls State and Boys State events will be Anderson. She will get the letters sent out to the candidates, and the group will select the representative at our March meeting.

The group received the renewal notice for membership dues for the 2013 year. Since the national organization and also the department headquarters will be taking more money from each person’s dues, the group will have to increase yearly dues to $20. Neubauer will send in the form.

With no other business, the meeting was adjourned. The next meeting date will be at 9 a.m. March 17 at the Freeborn Legion Hall.

The Hayward 4-H Club met for its monthly meeting on Feb. 12 at the Hayward Town Hall. Prior to the meeting they practiced their skits and musicals for Share the Fun. After that Secretary Jenny Golbuff called the meeting to order. Kristen Hahn also helped her with conducting the meeting. The group talked about its winter activity, club fundraising and Share the Fun during the meeting. As a group they voted and it was decided they would go roller skating for their winter activity. The Schallock and Hahn families served refreshments. Hayward 4-H junior leader Emma Iverson helped the cloverbuds and did a fun Valentine’s Day craft project. The next meeting would be on March 11. The 4-H group will be going to the Brownsdale Roller Rink. Following this they will be going to Videyo Arts in Austin for a tour and demonstration. They will have their monthly meeting and supper there also.

TOPS is a nonprofit weight-loss support group. There is no diet plan but support with others on the journey to health and wellness.

TOPS MN 979 meets at 9 a.m. on Thursdays in the Albert Lea Senior Center in the Skyline Plaza to weigh in and learn about healthy lifestyles.