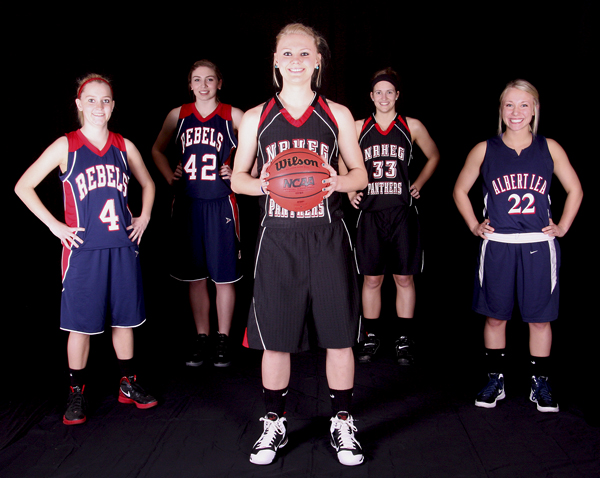 Carlie Wagner’s older brothers didn’t cut her any slack when they played sports on the family’s farm part way between Ellendale and New Richland.

Her mom, Jane, said that tough competition from an early age likely led her to be fearless when she plays basketball as a sophomore forward for the New Richland-Hartland-Ellendale-Geneva Panthers.

Carlie, the 2012 Tribune Girls’ Basketball Player of the Year, sure commanded the attention of the state basketball community — and many college scouts — when the team played during the state tournament. She set a state tournament record by scoring 48 points on St. Patrick’s Day at Concordia University’s Gangelhoff Center in a NRHEG victory over Pequot Lakes to capture third place.

On March 14, Wagner poured in a then-career-high 43 points when leading the Panthers to a 75-45 blowout of the defending state champion Braham on Wednesday. Wagner stole the spotlight from Braham’s Rebekah Dahlman, who had been touted by many outlets as the best girls’ basketball player in Class AA. Wagner also set the tournament’s three-game scoring record with 112 points. The sophomore averaged 37.3 points per game en route to the third-place finish and ended the season with 956, the third-most in state history.

If that weren’t enough, the farm kid was the youngest member this year to make the Associated Press All-State First Team for girls’ basketball. Needless to say, she made the Class 2A State Tournament Team and earned all-conference honors.

“We’ve known she’s been that all year,” her coach, John Schultz, said, “and playing on the big stage in the big tournament opened some eyes.”

He said some statewide basketball followers had assumed she was merely a standout on a small-school team with a weak schedule. The Panthers were undefeated in the regular season, tearing through the Gopher Conference. They showed their muster in postseason victories over Hayfield, Blue Earth and St. Peter. The team lost one game — the state semifinal to upstart Sauk Centre — to finish the season 32-1.

Schultz said they learned she was a strong, physical player with a 26-inch vertical leap.

Confidence, her coach said, is what Wagner brings to the court.

“At the state tournament she showed no fear toward anything,” he said.

Halfway through the season, he had to convince her to not share the ball so much. He said the team succeeded because as the postseason drew near, they coalesced into their roles. Wagner’s job was to score.

“We work hard to set her up for our team to score points,” Schultz said.

Wagner said while in the past she’s been apprehensive to shoot the ball more than her teammates, she knows now that she needs to score in order for the team to be successful.

“I wasn’t scared to shoot the ball or take it to the hole,” said Wagner, compared to last season when she still averaged more than 20 points per game. “My teammates gave me permission and that gave me more confidence.”

About seven years ago, Wagner’s father, Darren, hung a hoop on the garage. He measured it to the regulation height of 10 feet. Mom wondered if that was too high for Carlie.

Basketball, however, hadn’t been the family’s primary sport. The older brothers, Alex and Danny, now 23 and 21, were into wrestling, baseball and football. But they played basketball at the farm with their friends and their cousins on the downhill-sloped driveway. And when their kid sister played, she didn’t get special treatment.

The same now goes for the twins, seventh-graders Marnie and Maddie, who already suit up on the NRHEG varsity team.

Jane and Darren Wagner are high school sweethears who this May will have been married for 25 years.

Darren played football for New Richland before he hurt his knee, and his father before him was known for his talent in basketball and football in Ellendale.

She said Carlie was dribbling around the driveway with a toddler’s basketball by the age of 2, to the surprise of visiting family and friends.

The older brothers are fans of the sisters. Alex went to every game, and Danny missed only two because of conflicts. Danny made a video called “Carlie the Dagger” with highlights from the season. If you can find his Facebook page, you can see the video. It’s not on YouTube yet.

Wagner turned in one of the best offensive seasons in state history by averaging 29.9 points per game and scoring 956 points, third-most in state history. She scored a state-tournament record 48 points in the Class 2A third-place game and a record 112 points over the three-game tournament. She was named Gopher All-Conference and to the AP All-State First Team.

Ovrebo was named Gopher All-Conference for the third straight season after becoming the school’s leader for 3-pointers in a career (124), season (54) and game (6), while shooting 37 percent. She averaged 11.4 points and 2.9 assists per game and was the Rebels most reliable ball handler, leading the team in assist-to-turnover ratio. Ovrebo shot 76 percent from the free throw line.

Allis was one of the top shot blockers in the state this season, averaging 6.1 swats per game. She holds school records with 124 blocks in a career and six in a game, and her 54 this season was the 10th-most in state history. She averaged team highs in points (11.4) and rebounds (8.5), and was named Gopher All-Conference and an Associated Press All-State honorable mention.

Schlaak was a captain for the 32-1 Panthers this year and became the school’s all-time leading rebounder with 1,024 on her career after averaging 9.8 per game on the season. Schlaak averaged seven points, 3.1 assists, 3.8 steals and 1.5 blocks per game and was named Gopher All-Conference and to the Class 2A All-Tournament Team.

Woodside was the Tigers’ lone Big Nine All-Conference selection this season after averaging 15.2 points per game, the seventh-most in the league. Woodside was sixth in the conference in assists per game (3.6) and fourth in steals (3.5). She was Albert Lea’s primary ball handler and finished second on the team in steals, averaging 2.4 per game.

Schultz set the school’s single-season record with 73 3-pointers this season. She was named Gopher All-Conference after averaging 11 points and 6.8 rebounds per game.

Ovrebo averaged 9.9 points and led the Rebels with 2.3 steals per game this season. She was named Gopher All-Conference and shot over 50 percent from the field and 71 percent from the free throw line. She finished seventh in school history in 3-pointers made (42).

Johnson led the Bulldogs with 10.9 points and 7.4 rebounds this season. She notched 21 steals and 18 blocks on the year.

Martin was named Valley All-Conference this season after averaging a team-high 11.6 points per game. She also led the Knights in rebounding with 5.8 per game.

Ashley Tewes led the Tigers in 3-point shooting this season, knocking down 32 from beyond the arc and averaging 34 percent. She was named a Big Nine Conference honorable mention after averaging 8.4 points per game and led the Tigers in assists (4.2) and steals (4.3) per game.

Rehnelt came off the bench for most of the season but finished second in scoring for the Tigers with 8.2 points per game. She was the team’s top free throw shooter at 69 percent and made 26 3-pointers.

Cole was the Panthers’ fourth-leading scorer this season, averaging 5.4 points per game. She added 4.2 rebounds and shot 30 percent from behind the arc.

Voigt was named Gopher All-Conference honorable mention this season after averaging 5.7 points and 7.2 rebounds per game. She came on strong during the second half of the season and scored a career high 14 points.

Keller was named a Valley All-Conference honorable mention this season and averaged 6.5 points and 3.2 rebounds per game. She had active hands and led the Knights in assists (3.2) and steals (3.6) per game. She was the team’s co-captain.

Low led the Vikings in scoring this season, averaging 12.9 points per game. The senior shot 28 percent from behind the arc and was second on the team in assists and steals. Low also averaged 4.7 rebounds per game.