Progress: ‘Just about any type of cleaning’ 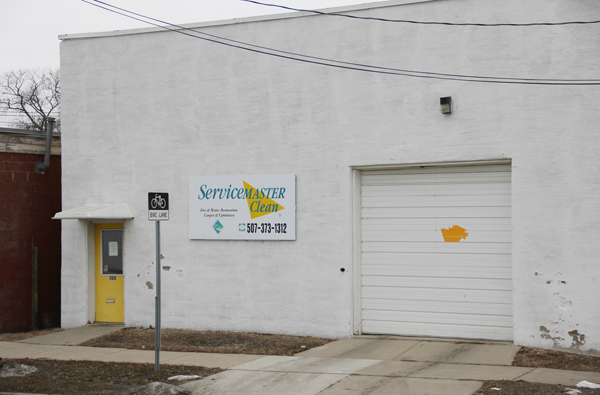 If you weren’t looking for it, you’d probably miss the building labeled “ServiceMaster Clean” while driving down Front Street. The business provides many cleaning and restoration services for both residential and commercial properties in Albert Lea and the surrounding areas. 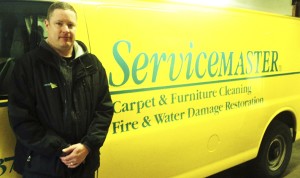 Tim Smick poses for a photo in front of one of the vans used for cleaning and restoration. — Nya Lony

“We do just about any type of cleaning service that someone would need,” said co-owner, Tim Smick.

Smick has been working at ServiceMaster for 24 years. Fifteen years ago, Smick and Craig Diegnau began a business venture as owners of a ServiceMaster Clean. They bought out the previous owner of the Fairmont office who also happened to be Smick’s father-in-law. Smick and his partner began slowly expanding, eventually annexing the Albert Lea office in 2007. Both sites combined cover about 80 miles along Interstate 90. They employ five full-time and six part-time employees.

“We don’t have plans to continue expanding right now,” Smick said. “We cover a large area of southern Minnesota, and sometimes we even get calls from Iowa.”

Smick has been working at ServiceMaster for 24 years. He and Diegnau started their business venture as owners 15 years ago with the Fairmont office when they bought out the previous owner who also happened to be Smick’s father-in-law. The two began slowly expanding, annexing the Albert Lea office in 2007.

“We get calls from people who are selling their homes or retirees who are moving, and we come in with a truck and clean the whole thing from top to bottom,” Smick.

Disaster restoration makes up a large portion of the big jobs the ServiceMaster Professionals do around the area.

“We did a lot of cleaning after the tornadoes in the summer of 2010,” Smick said. “There was water restoration to be done, windows and a variety of other cleaning jobs. And last year we did a lot of ice dam clean outs. ”

One of the biggest jobs Smick and his employees worked was at the Gateway Computer plant on Sioux City, Iowa. The environment in which the computer parts were being packaged and assembled had to be free of dust. The ServiceMaster Professionals had to do a lot of high vacuuming throughout the entire plant.

“We do a couple of big jobs every once in a while, but most of what we do is day-to-day cleaning,” Smick said.

“We get a call and we come out right away,” Smick said.

1982: The property at Front Street became a ServiceMaster Clean.

1988: Smick began working for his father-in-law at the ServiceMaster in Fairmont.

1997: Smick and Diegnau became owners of the ServiceMaster Clean office in Fairmont.