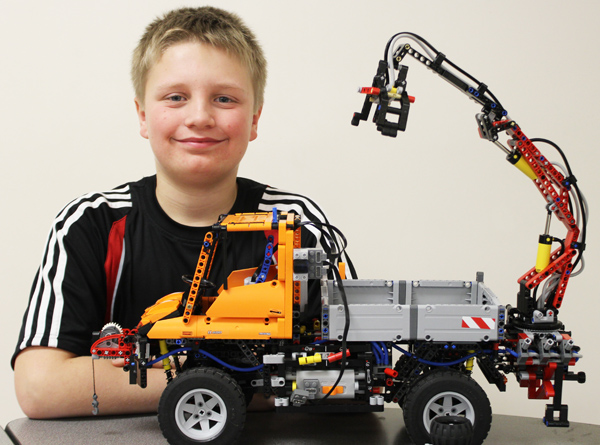 Austin Attig poses for a photo with a Unimog 400, his project for the Freeborn County Fair this summer. - Nya Lony

The exhibitions in the 4-H building at the Freeborn County fair have been the most visible display of 4-H’s engagement of the youth in Freeborn County. Participants compete in a variety of categories ranging from showing beef to craftwork. During the last few years, the number of available project categories has been expanding. Many of the new categories are spin-offs of other combined categories, products of newfound interest or opportunities to incorporate more technology into the program. 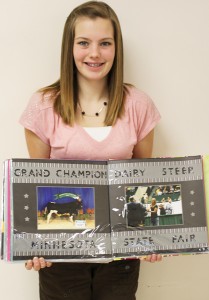 Malory Mattson holds up her scrapboook, which is opened to her favorite page. The spread is a display of the photos from when she was the dairy beef grand champion at the Minnesota State Fair in 2010.

“Whenever there is enough interest, we add something new,” said county 4-H coordinator, Amy Wadding. “Some of the newer categories include scrapbooking, llama showing and robotics.”

Malory Mattson, 16, is a sophomore at the Alden-Conger school. She has been involved in 4-H since second grade, and she decided to join because her father used to be involved with the program when he was younger.

“I look forward to participating in 4-H every summer,” Mattson said. “My favorite part is showing my cattle at the county and state fair.”

Mattson has competed in many categories, including beef and swine. In fact, she was the grand champion at the Minnesota State Fair in 2010 in the dairy beef category. In addition to showing beef and swine, Mattson now also competes in the scrapbooking category.

“Scrapbook was added as a new project category this past year,” said Wadding. “It used to be combined with another category, but because there was enough interest in it, we made it its own category. However, it’s still a very small category; there are only about 10 participants in it.”

Mattson started her scrapbook two years ago, and so far she has completed 86 pages. 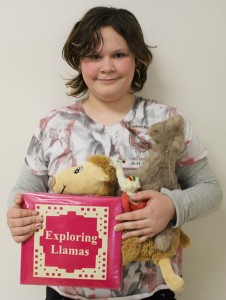 Tirzah Larson is holding a variety of products made of llama fur. She also displayed these with her poster in 2011.

“I got the idea to start scrapbooking when I went to my cousin’s graduation open house,” Mattson said. “She had a scrapbook full of her sports pictures and school work. I thought it would be cool to start one for my 4-H because that’s what I live for. And if I start now, I won’t have to try to scrapbook 10 years worth of work at one time.”

Mattson and the other participants in the category compete at the Freeborn County fair by bringing their scrapbooks to the judging table. Then they are asked a series of questions including how it was made and which part of the scrapbooking process was the hardest and which part was their favorite.

The next judging for the scrapbooking category is in August at the Freeborn County Fair.

Tirzah Larson, 11, is a fifth-grader at Alden-Conger school. She has been involved in 4-H since she was a kindergartner. She joined after moving from Alden to Conger in order to make some new friends. Larson’s favorite part about 4-H is participating in her project category: llamas.

“I like the costume part of showing llamas the best,” Larson said. “You get to pick a theme, and you and your llama dress up at the Freeborn County Fair. It’s a fun category.” 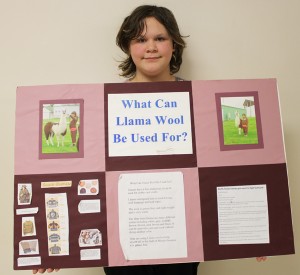 Tirzah Larson shows her project poster about llamas that she presented at the Freeborn County Fair in 2011.

Besides the costume aspect of showing llamas, each participant and their llama must also score well in public relations, obstacles, inspection and overall showmanship.

“Public relations is when you bring your llama from the farm to a populated area and how it reacts to the public, the sounds, the people and petting it,” Larson said.

During the obstacles course, the llama has to walk around swimming pool noodles, jump over logs and a variety of other small obstacles.

“One time when I was riding my llama through the obstacle course, her halter slipped and I fell off into the swimming pool we were walking around,” Larson said. “It wasn’t too bad since that was probably one of the hottest days in the summer.”

Larson started showing llamas out of a shared interest in them between her and her uncle. She has two llamas, Dolly and Packy. One llama lives on her uncle’s farm, the other lives on a farm just outside of Albert Lea.

There are 17 other people that show llamas at the Freeborn County Fair along with Larson and according to Wadding, the participant pool is continuing to grow every year.

Austin Attig, 11, is also a student at the Alden-Conger School. Attig is one of 15 participants in the newest 4-H project categories: robotics.

Attig joined 4-H two years ago along with a number of his friends. His favorite part about the program is participating in all of the activities and having something to do over the summer. In the past, Attig has had exhibitions in forestry, photography, canned goods, vegetables and fruits. His current focus, however, is robotics.

“I’m really into science and I’m also into Legos,” Attig said. “I noticed that by adding a motor and battery boxes to things I could build out of Lego kits, I could make them do different things. Ever since then I’ve been building stuff and showing them at the Freeborn County Fair.”

One of the rules in the robotics category is that the participant’s creation must have the ability to move. Previous projects range from Ferris wheels to monster trucks. Some projects are remote controlled while others have controls built onto them and many are born out of starter kits from brands like Lego NXT Brick.

“The project I showed last year was called the Excavator,” Attig said. “I built it out of a Lego kit. After showing it, I took it apart and built 150 new creations out of it. The one that I’m showing this year is the Unimog 400 model, but I just call it the Big Car.”

Projects like those created by Mattson, Larson and Attig and many others will be on exhibition at the Freeborn County Fair in August. Although they have opportunities to show their work in special clubs or science fairs, the county fair is where their hard work and creativity gets the most recognition.