Progress: It’s all in the details 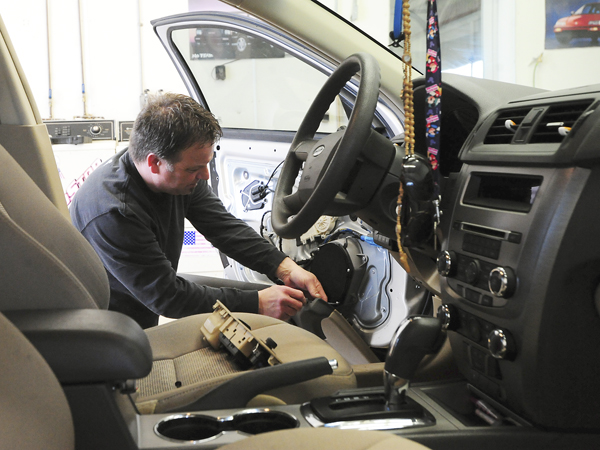 Matt Rahn, a six-year employee of Red Carpet Car Wash, removes paneling from a Ford Fusion SE as he prepares to tint the windows. Rahn leads the complete detailing of cars and runs a snow plow for the company. -- Andrew Dyrdal/Albert Lea Tribune

You want to own a clean car, right?

Curtis Smith wants you to, too. 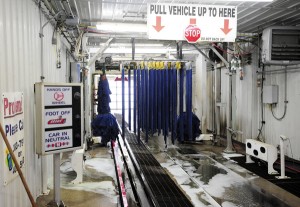 Smith, the owner of Red Carpet Car Wash in Albert Lea, is as passionate about keeping his own car clean as his customers’. So when he purchased the company in 2003, he bought an automatic washer within three years and did away with the old method of manually washing and waxing cars – allowing his customers 24-hour service.

Smith said Red Carpet washes about 16,000 cars a year but is hoping to hit 22,000 in the future, a number the company closed in on before Smith bought it and there was less competition.

“I’d like to wash every car in town,” said Smith, who also owns Arrow Printing and is a partner owner of Skyline Plaza. “We’re always looking to grow.”

Red Carpet is not only a car wash, but does complete detailing and tinting, too. At Smith’s right hand is Matt Rahn, a six-year employee who manages the business. Rahn leads the car detailing and is a jack-of-all-trades when it comes to making Red Carpet run. 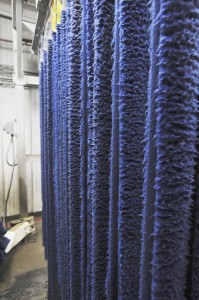 The cloth inside Red Carpet Car Wash’s automated washer is made of lamb’s wool. Owner Curtis Smith said his company is one of two washers in Albert Lea with cloth but the only that uses lamb’s wool.

Smith said there are some people in town who will only let Rahn touch their car.

“Matt has detailed his whole life,” he said. “A lot of people say when the car’s done, it looks brand new. I’ve never heard a complaint about him.”

Red Carpet details up to two cars per day, but no more. Smith said it takes eight man hours to do a complete detail, which includes shampooing the floor mats, carpets and seats, cleaning the dash and windows, and removing the air vents and cleaning them, too.

“Anything you see when you open the car door is clean,” Smith said.

When a car’s interior is done, Rahn buffs, polishes and waxes its exterior.

Smith said Red Carpet details about 750 cars per year but no more than two a day because he doesn’t want to compromise quality for speed.

“Could we do more? Yes,” Smith said. “But we’re very thorough and don’t take shortcuts.”

Car washing and detailing is not a need for most families, but Smith said Red Carpet did not take a hit when the economy did.

“When we saw $3 a gallon gas, we thought there goes the car wash,” he said. “But there’s something about a clean car. Business has been very steady.”

While Red Carpet’s detailing isn’t rushed, its car wash is, but Smith said that’s what makes his company stand out from its competitors.

Cars are automatically pulled through the car wash from start to finish in just a few minutes. The washer’s automatic teller accepts cash, credit and debit cards and Red Carpet’s tokens. The line into the wash moves quickly because it can fit five cars on its track at a time.

“We’re the only 4G car wash in town,” Smith joked. “In this day in age, everybody wants speed.”

Red Carpet’s washer was installed in the summer of 2006 and cost $155,000. Another $100,000 was spent on improvement to the site and to accommodate the new equipment, including a 96-foot long tunnel.

“We tried to spare no expense,” Smith said. “It would have been nice to have another $50-80,000, but it’s just like building a house. After the fact you think of a few things you would have done differently.”

Red Carpet’s customers have wash choices that range from $5 to $12. Smith said its $9 wash is the most popular because its sells wash tokens for $6 in counts of 10. He also donates tokens to fundraisers. Red Carpet’s $12 was is the only one that includes hot wax within 100 miles, according to Smith.

Smith sees a spike in his customers in the winter because it’s too cold to wash cars by hand. He said he averages about 1,500 cars in the winter and 1,000 in the summer.

Red Carpet also does overflow detailing for Dave Syverson Ford, cleans police squad cars and has wash plans with about 20 businesses, which receive washes by punching a code and are billed monthly.

“Those businesses have the cleanest cars, trucks and vans in town,” Smith said. “You know they’re customers of mine.