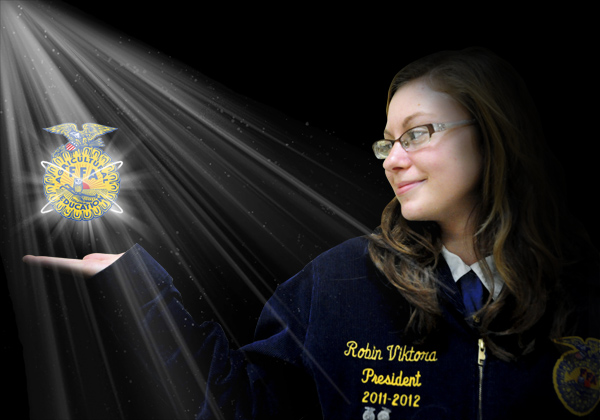 Robin Viktora is the 2011-12 president of Albert Lea’s FFA chapter. Viktora is the first female in junior standing to become president in the chapter’s history. — Brandi Hagen and Stacey Bahr

Before joining the Albert Lea FFA, Robin Viktora was the quiet girl in a corner only concerned with her schoolwork.

Now, three years into the program, Viktora leads the chapter as the first female president in junior standing.

“I’ve learned to come out of my shell,” Viktora said. “I was terrified of speaking in front of people. Absolutely terrified to the point I didn’t want to come to school when we had to give a speech.”

Last year through FFA, Viktora took second place in public speaking and went on to compete at the state level.

“I can talk in front of people, and it doesn’t phase me anymore,” Viktora said. “It’s amazing.”

Albert Lea FFA Adviser Kim Meyer said the program has a lot of activities to offer, and it is up to the students to get involved.

“You get out of FFA what you put in,” Meyer said. “Just by paying dues you aren’t going to gain leadership.”

In 1988, FFA changed its name from Future Farmers of America to National FFA Organization.

“You don’t have to be a farmer to join because in Albert Lea we’d probably have five members,” Viktora said. “It’s about leadership now and it helps you out in life. You become such a better person.”

As word spreads that it is a leadership program and not just for farmers, Albert Lea’s FFA has continued to grow in numbers. Viktora said this year there are about 70 members, roughly 20 more than last year.

Meyer picked Viktora as a model for the leadership that can be gained.

“I saw her as a shy freshman girl going into class,” Meyer said. “I see her now as a dynamic junior leading the whole chapter.”

Besides running the chapter’s meetings, Viktora has managed the FFA food stand at the Freeborn County Fair, was in charge of volunteers during the national Red Power Roundup Show last summer, served as chairwoman of the fruit sales committee, took first in fruit sales by selling more than $2,000 worth, served on the state nomination committee and is currently on the ag sales team.

“Once I do something, I just want to get to the top,” Viktora said. “That’s my attitude on everything.”

She said in order to keep up with the workload of FFA and get straight A’s in school, she makes sure to stay organized through the use of an agenda and calendar.

“I love being in charge,” Viktora said. “This is really good because FFA is pretty much leadership now, and I get to a chance to put all those skills to work. I’m not good at sports so I finally have something I’m good at.”

Meyers agrees FFA is her niche.

“Robin’s personal growth from a ninth-grader has been tremendous,” he said. “She’s passionate, and I think students who are passionate about it surface to the top.”

The chapter as a whole has gained and shown their leadership in many ways. Examples of their involvement include attending camps, selling fruit, adopting a highway, giving farm tours to third-graders and doing a corn drive.

The corn drive is done during harvest season as a fundraiser. Farmers are asked to donate corn and then the corn is sold to an elevator. This year, the chapter raised $16,000. Some of the money is used to help people in need. This year they donated to two charities, Camp Courage and Camp Friendship, and adopted two families from the Salvation Army for Christmas. Viktora said they’re always looking for more places to donate to.

The fundraising also helps to cut costs for the programs and activities the FFA members participate in.

“Mr. Meyer is great with covering stuff so it’s affordable for everyone,” Viktora said. “It’s from fundraising but he’s great at keeping us going.”

Something that has pushed Meyer to continue as an adviser is his belief in agriculture being the most important industry.

He said by producing leaders in agriculture, it can pretty much be guaranteed that the food supply will always be healthy and safe to consume.

In regards to leadership, Meyer said, “It’s not an overnight deal.”