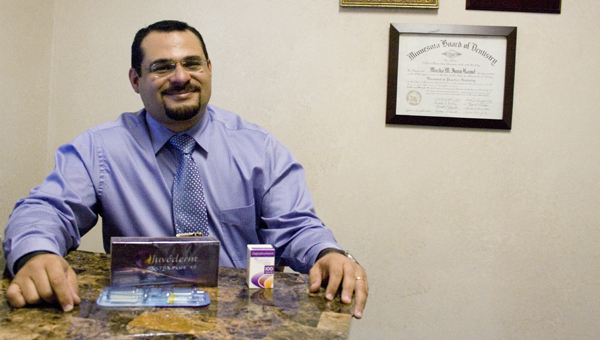 Cosmetic dentist Mark Kamel of Uptown Dental sits with samples of Botox and Juvederm, which he was licensed in August to inject. — Sarah Stultz/Albert Lea Tribune

As a family and cosmetic dentist, Marko Kamel of Uptown Dental is interested in more than just people’s teeth.

Trained to perform tasks such as extractions, teeth whitening, denture making, along with other techniques to enhance a smile, Kamel in August expanded his training and became licensed to perform Botox and Juvederm injections. 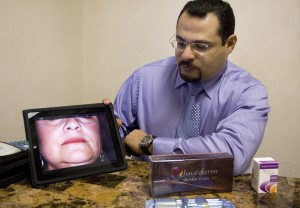 Cosmetic dentist Marko Kamel of Uptown Dental shows a photo of a patient uploaded to his iPad in January. Kamel takes photos of the patient’s face before determining how much Botox or Juvederm is needed. — Sarah Stultz/Albert Lea Tribune

He’s one of a handful in the state able to do so.

Botox and Juvederm temporarily improve the look of lines on the face that often come with age.

Botox, a prescription drug used to stop excessive movement of facial muscles that cause wrinkles, can be injected in the forehead, between the eyebrows and on the outsides of the eyes — the area commonly referred to as crow’s feet. The drug works by blocking nerve impulses to the injected muscles.

Juvederm, a gel filler underneath the skin, most often is injected in the folds around the nose and mouth, the area known as the smile lines.

Though the popularity of the treatments still is gaining steam, Kamel said little by little — mostly by word of mouth — area residents are starting to find out about what’s offered locally.

The next closest city to offer a similar procedure is Rochester.

What are the procedures?

Whether receiving a Botox or Juvederm injection, Kamel said he first meets with the patient for a one-on-one consultation.

During the consultation, he photographs the face of the patient, particularly the areas around the forehead, eyes, nose and mouth. The photos are transferred to an iPad for him and the patient to look closer at the details.

Once the photos are uploaded onto the iPad, Kamel said he consults with the Botox patients to discuss what changes they would like to see and how he can achieve those goals. Then he figures out how many units of the injection are needed.

Kamel said the photo taking and the injections can all take place in one day — if scheduled ahead of time, they can even be on the same day as dental checkups. The treatment is not classified as a surgery and it requires no recovery time.

He noted that Botox injections last for about six months and typically cost $10 to $15 a unit. How many units each patient needs varies.

With the Juvederm injections, the dentist said sometimes it is harder to figure out how much of the drug is needed. He will inject some and then hand the patient a mirror to see if more is needed.

The patient will come back two weeks later to have post-operative pictures taken and to see if more of the injection is necessary.

The Juvederm typically lasts for one to two years with some additional enhancements. It costs about $500, though some people may need more of the drug or less.

Kamel said he plans to have an open house at the Uptown Dental office in Albert Lea in the first week in April for people to learn more about the procedures.

2000: Marko Kamel graduated from Ain Shams University in Cairo, Egypt, with a dental degree. He soon began working as a dentist.