“Everything is nearly copacetic. I’ve been sleeping on the sofa because my snoring keeps me awake in bed. I tried sleeping on the pool table, but I rolled all night. I’m trying to watch what I eat, but it’s making me cross-eyed. I had a dental appointment yesterday.”

“No, but I had my oil changed. The dentist, Phil Eng, is on my bowling team. Do you know what a Newton’s cradle is? It’s one of those desktop gadgets with the stainless steel balls that swing back and forth and smack into one another. I’ve been busy in the shop making a giant Newton’s cradle out of my old bowling balls. I love bowling, but there is only one reason to bowl — so you don’t have to watch others bowl. I remember that when I began bowling, I was a substitute on the team. The substitute is the only one who has to be there every week. The rest of the team was made up of Tim Tell and his 10 brothers. There were more Tell brothers than there were bowling pins. I can’t remember who sponsored that team. I doubt anyone kept those records so I’ll never know for whom the Tells bowled.” 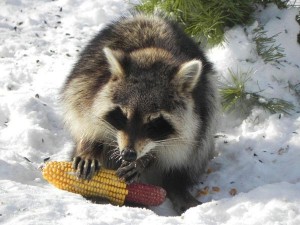 Photo of a hungry raccoon by Al Batt.

Are there more raccoons than ever before? The problem is that I have some difficulty in remembering ever before. During my lifetime, I am definitely seeing more raccoons with each passing year. I get many calls and emails from people experiencing the same thing. Research has shown that raccoon populations are rising dramatically within cities. The abundance of food would certainly be a major factor in the raccoons becoming city slickers. Raccoons are omnivores and will eat just about anything. A garbage can is a fast food restaurant to a raccoon. They thrive in cities where their major predator is the automobile. One study found that there are 50 times as many raccoons living in the city of Toronto than in an equal area of surrounding countryside.

“Is there a folk medicine that works on honeybee stings?” When a honeybee stings, its barbed stinger catches in the skin like a miniature harpoon. The only way the bee could fly away is by tearing the rear from her body. This is what she does and it kills her. The stinger can be easily removed with the fingers or brushed off. Extra care has to be given by anyone who has an allergic reaction to stings. Unfortunately, none of the old bee-sting cures have been scientifically proven to work. That includes placing copper pennies on the sting, chewing tobacco (already been chewed), paste made from cigarette tobacco, salt, burdock juice, baking soda, clay, vinegar, garlic, honey, raw onion or aspirin. I have used ice, aloe vera and the juice of spotted touch-me-not. They appeared to help, but they may be nothing more than placebos. Others have sworn that both toothpaste and meat tenderizer work. This is not an endorsement or a dismissal of any of these home remedies.

Scott Mehus of the National Eagle Center in Wabasha, with the cooperation of Audubon Minnesota, released a golden eagle fitted with a satellite transmitter near Waupaca, Wis., on Feb. 16. By tracking golden eagles known to use the blufflands in winter, The Golden Eagle Project strives to understand migration patterns, breeding origins and winter habitats of the golden eagles. The project conducts an annual survey and has found consistent presence of golden eagles wintering in the blufflands of southeast Minnesota, western Wisconsin and northeast Iowa. This year’s Jan. 21 survey recorded 129 golden eagles. The released bird, Golden Eagle 45 (also known as Jeanette), which was trapped in Waupaca County, is a large adult female weighing more than 14 pounds. Jeanette had been feeding on deer carcasses in the area. A golden eagle released in 2009 migrated from western Wisconsin and spent the summer north of the Arctic Circle. The Golden Eagle Project is a partnership of the National Eagle Center and Audubon Minnesota, with support from Minnesota Department of Natural Resources Non-Game Division, Wisconsin DNR and the United States Fish and Wildlife Service, with funding through Minnesota’s Environment and Natural Resources Trust Fund.

The American Bird Conservancy is selling a new, translucent adhesive tape, which tests show can significantly reduce bird collisions with glass windows and doors. Birds can’t see glass and don’t understand architectural cues, such as window frames, that alert people to the hazard. Experts estimate that up to 1 billion birds may die each year from collisions. Unlike some sources of bird mortality that predominantly kill weaker individuals, there is no distinction among victims of glass. Because glass is equally dangerous for strong, healthy, breeding adults, it can have a particularly serious impact on populations. Studies have shown that even small windows can be dangerous to birds that are accustomed to flying through gaps between trees and shrubs. To learn more about the ABC Bird Tape, go to abcbirdtape.org.

From “A Book of Bees” by Sue Hubbell, “In an 1899 study, one Professor C.F. Hodge marked bees and watched them from daylight to dark. He reported, ‘No single bee that I watched ever worked more than three and one-half hours a day.’ In one case, he saw a worker bee crawl into a cell and he watched her remain lying there quietly for nearly five hours. In the 1950s, Martin Lindauer, an entomologist, followed up on these observations. In a rigorous study, he tagged great numbers of bees and found that they spent a lot of time doing nothing at all, or very little. One typical bee, during a hundred and seventy-seven observation hours, did absolutely nothing for seventy of them.”

“The most powerful thing you can do to change the world is to change your own beliefs about the nature of life, people, reality, to something more positive.” — Shakti Gawain

“If they can make penicillin out of moldy bread, they can sure make something out of you.” — Muhammad Ali