Funeral services for Ralph F. Gilman, 76, of Albert Lea, will be held at 11 a.m. Friday at United Methodist Church. The Rev. Tom Biatek will officiate. Interment will be at Greenwood Cemetery at a later date. Visitation will be from 5 to 7 p.m. Thursday at Bayview/Freeborn Funeral Home and one hour prior to the service at the church. To sign the guest book, go to www.bayviewfuneral.com. 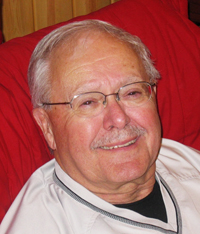 Ralph F. Gilman was born on Sept. 6, 1935, in Rosemount, the son of Ralph and Ruth Gilman. He went to school in Ellendale. Ralph spent most of his life in the Albert Lea area. On Aug. 28, 1955, Ralph was united in marriage to Barbara Cornick.

He was employed at Coonradts Supermarket, Duffy’s Superfare and was the manager of Piggly Wiggly on South Broadway. In 1974 Ralph moved to Geneva and bought the Geneva Market. He returned to Albert Lea in 1977 and was employed at Clothing Care Center, then the manager of the evening shift at Ventura Foods for 20 years before retiring. During this time, Ralph also was the owner of Gilman Stables. Ralph was an active, lifelong member of the United Methodist Church. Ralph was a devoted member of the Albert Lea community. He was instrumental in the Albert Lea teen community and served as the first president of the Teen Center. He was a member of the Optimist Club, Sertoma Club, Kiwanis Golden K2, started the Christmas Tree Burn which was an activity for community bonding and involved the Albert Lea Choir. Ralph served as president of the Sunset Saddle Club and was a member of the Minnesota Jaycees through which he attended the Dale Carnegie Course and was the winner of the Distinguished Service Award in 1963. Ralph was also proud to have celebrated 35 years of sobriety. Ralph enjoyed hunting and fishing, horseback riding, reading and traveling with his family.