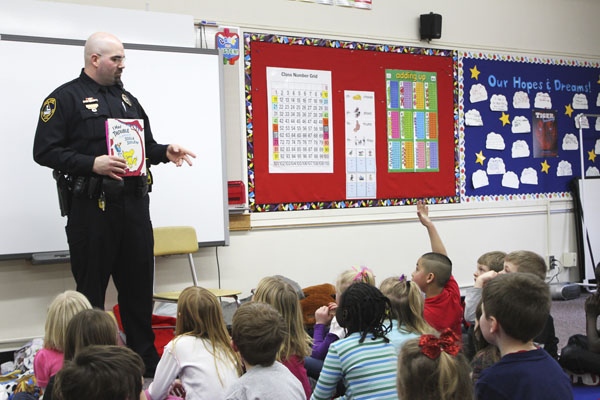 Albert Lea police officer Tim Harves asked a class of first-graders at a Sibley Elementary School on Friday what they wanted to be when they grew up.

One said she wanted to be a designer. Another, an author. And another, a veterinarian.

For each, Harves explained why reading is important, whether ordering design supplies, crafting a novel or knowing what kind of medicine is in a bottle.

The program is coordinated by Linda Bottelson, volunteer coordinator at Sibley for the Minnesota Reading Corps.

“We want to give community leaders the chance to come to school to see how important reading is in people’s lives,” she said.

It was a big week for reading. Sibley students dressed in their casual reading clothes Friday, whether pajamas, sweats or any comfy clothes. Some brought plush toys. They had dressed as Dr. Seuss characters on Thursday and as favorite book characters on Wednesday.

Lawyer Bob Sturtz said reading and comprehension are needed every day in his profession. His father, Judge William R. Sturtz, told him, as the young Sturtz was going into law school at Hamline University in 1984, that: “The importance of the education you get is being able to read, write and understand the English language properly.”

But when he spoke with the kindergartners before reading “And To Think That I Saw It On Mulberry Street,” he put it more simply. He said his father “always told him reading and writing was very important.”

Mary Williams, the director of teaching and learning for Albert Lea Area Schools, said reading is integral to learning. The district needs all children reading well by third grade because so much of their education beyond that level relies on reading comprehension.

Mario Olson’s third-graders read books all day Friday. They were spread out all over the room, reading book after book after book. The class favorite was “Cat in the Hat,” by Dr. Seuss.

Harves told the children if they want to be a police officer, reading and writing are required.

“There is not hardly anything I do that I don’t have to go back to the station and write a report,” he said.