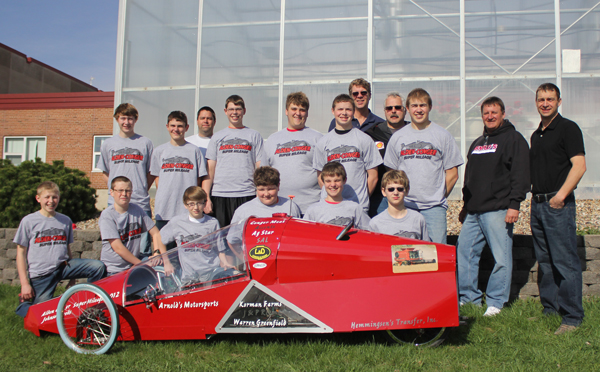 The Alden-Conger Supermileage team and its coaches pose for a photo by their car that runs on diesel. The team left for a competition in Houston, Texas, on Tuesday.

ALDEN — Alden-Conger’s Supermileage team is against heading to Texas for a continent-wide competition. Last year they won second place with a car that runs on ethanol and they hope to surpass that ranking.

Thirteen students and their chaperones left Tuesday at noon to drive to Houston to compete at the Shell Eco-marathon. The challenge is to build the most fuel-efficient cars. 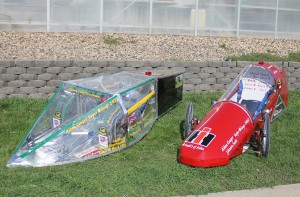 Alden-Conger’s Supermileage team built these two cars. The one on the left runs only on ethanol and the one on the right runs on diesel.

“We totally rebuilt our cars this year,” team captain Jacob Sorensen said. “We’re excited to get down there again.”

The team will race on Friday and Saturday, weather permitting. The track is 0.6 miles long, and there will be multiple runs recorded. The Alden-Conger students, who are in high and middle school grades, will compete against other schools and colleges at the competition.

The team has gotten more experience with running a car purely on ethanol, even though they’re more used to racing E-85 cars in the yearly Minnesota Technology Education Association’s state Supermileage event.

“We just really want to thank all our sponsors for their help,” Sorensen said. “And let people know that they can follow us on our blog while we’re down there.”

The blog is at www.aldensupermileage.blogspot.com, and the group has already been updating about their travels to get to Houston. Team coach David Bosma, a teacher at Alden-Conger, agreed that all the team’s work couldn’t have been done without all the businesses in the community who support the team.

One such business was Arnold’s of Alden, an International Harvester dealer, which donated $2,500 to the team. In honor of the donation the team decorated it’s diesel car in red, which was a sharp contrast from one of the team’s cars last year that was John Deere-themed.

“It’s a successful program,” Arnold’s Manager Brad Wermedal said. “When Jacob approached me he was very professional and he explained the program.”

Bosma said the team has raised more than $11,000 by fundraising and from area businesses.