Ruth Elvebak, 96, of Kiester, died Sunday, March 4, 2012, at St. Luke’s Lutheran Home in Blue Earth. Funeral services will be at 11 a.m. Friday at Trinity Lutheran Church in rural Kiester. Visitation will be held one hour prior to the service at the church. The Rev. Chris Fiske will officiate and burial will be in the church cemetery. Bruss-Heitner Funeral Home in Wells is in charge of arrangements. 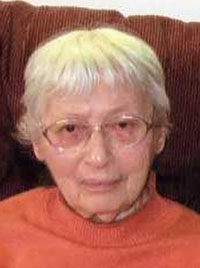 Ruth was born Oct. 2, 1914, the eighth child of nine born to Andrew and Dena (Johnson) Elvebak in Eden Township, Winnebago County, Iowa. Ruth graduated from Bricelyn High School in 1931, and attended art school in Des Moines, Iowa, for photo retouching. She graduated from the Art Institute of Chicago. She was portrait artist and did many portraits in Chicago, New Orleans, Ohio, Mexico and Minneapolis. She did many portraits for family members ,too. From 1944 to 1946, she was a WAC in the U.S. Army and learned to be an X-ray Technician. Ruth had her own art studio in Minneapolis called Anders Gallery in the 1950s.

Ruth is survived several nieces and nephews and their families.