“Everything is nearly copacetic. I had my identity stolen, but the thief gave it back. I had my car towed to town today. There is nothing wrong with the heap, it’s just cheaper than filling its tank with gas. That wreck gets its best mileage while on a hook. I told a young nephew that I walked five miles to and from school — uphill both ways — when I was his age. The kid thinks it was because I couldn’t afford to buy gas. The boy should become a meteorologist. He’s a drip. I had a lady stop and ask directions the other day. That doesn’t happen much anymore. I miss that. I enjoy giving directions, but asking has been replaced by GPS units and cell phones with navigational apps. Anyway, the woman asked me how to get to Larry Dodin’s place. I’ve never heard of Larry Dodin, but I had to tell her something.”

“Oh, I gave her directions. I advised her to turn left at the end of my driveway and to keep going until she had hit five stop signs and once she went past the fifth one, she should stop and ask someone else for directions.” 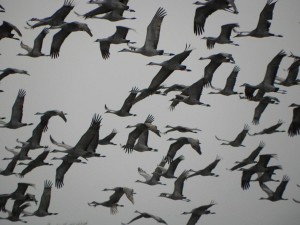 Photo of sandhill cranes at Rowe Sanctuary by Al Batt.

It was the middle of March. Daylight savoring time.

As the clouds thinned beneath the sun, I walked where multitudes of bison once traveled. The sun’s rays highlighted a sky filled with cranes. It made an astonishing blend of effulgence and beauty.

The weather was undecided — hot, wet and windy. I wished I had brought a wide-brimmed hat and wind chimes.

I was near Kearney, Neb., to enjoy the company of cranes. Each year, about 600,000 cranes hold a reunion at their ancient layover spot on the Platte River in central Nebraska, a pinch in the hourglass of migration. I joined them because 600,000 cranes can’t be wrong. Ecclesiastes tells us, “To every thing there is a season, and a time to every purpose under the heaven.” Jeremiah adds, “Even the stork in the heavens knows her times, and the turtledove, swallow and crane keep the time of their coming.” The Platte River has been described as a mile wide and an inch deep — too thick to plow and too thin to drink. Each crane stays three to four weeks adding 20 percent to their weight on a diet that is 80 percent waste corn. This year was an odd one, as approximately 1,000 cranes overwintered.

I watched two tall sandhill cranes in corn stubble — a world onto themselves. Nods of recognition. Bows of appreciation. Small bits of vegetation thrown into the air. A polite food fight. Trilling calls followed by an energetic dance. A love song. The calls become etched in the memories of all who hear them. The cranes leaped with outstretched wings as if they were splendid marionettes. The choreography was perfect.

A sandhill crane is 2 to 7 years old before it chooses a mate. It takes the relationship seriously, remaining paired for life. The crane has been the symbol of good fortune, fidelity and honor. Lovely paired, the cranes leave the Platte, realizing that the early bird gets the nest. They fly 200 to 300 miles a day to their nesting territories in Minnesota, Canada, Alaska or Siberia.

Cranes are amazing creatures, as is every living thing.

They can fly 30 to 50 mph and wing their way over Mt. McKinley, higher than 20,000 feet. A breeding territory can be a square mile. Sandhill cranes are long-lived, surviving 20 years or longer.

Audubon’s Rowe Sanctuary near the Platte has 15,000 human visitors during the six-week period that the cranes visit. Rowe Sanctuary offers blinds that are opportunities to be near the cranes without disturbing them. After feeding in the abundant cornfields, flock follows flock to a night roost on sandbars in the Platte. Their river dance forced me to measure my pleasure in miles. Friends and I gathered in a blind to get a close look at the spectacle. One in the group was the incredible photographer, Michael Forsberg of Lincoln, who has taken more photos of cranes than there are cranes. I watched intently as the birds flew in. The cranes became a beautiful bouquet in which the flowers arranged themselves. I listened to the cranes. Their calls are voices of antiquity — the sound of nature calling. Each time I visit a blind, I become a witness without need of subpoena. I’ve been in the blinds many times and have learned that the old becomes new. It is possible to put the genie back into the bottle.

In a morning blind, the sight of cranes rising from the river like smoke touches the soul in many ways. I have seen people weep. Bill Taddicken, manager of Rowe Sanctuary told one group going into a blind that the adventure would be life changing. One woman chastised Bill, saying that he shouldn’t say such things and the viewing was unlikely to change anyone’s life. As she exited the blind, the woman told Bill, “I’m sorry. You were right.”

Cameras, binoculars and spotting scopes abounded in the blinds, but secrets remained. The sandhill cranes are an extraordinary book that I started to read but had to leave unfinished. I can’t wait to get back to them.

Seeing the cranes is a gift. Everyone is gifted, but not everyone opens the present. I am blessed to have witnessed the cranes. Looking at cranes not only knocked my socks off, it rolled them up and put them in the dresser.

“Our ability to perceive quality in nature begins, as in part, with the pretty. It expands through successive stages of the beautiful to values as yet uncaptured by language. The quality of cranes lies, I think, in this higher gamut, as yet beyond the reach of words.” — Aldo Leopold

“Cranes carry this heavy mystical baggage. They’re icons of fidelity and happiness. The Vietnamese believe cranes cart our souls up to heaven on our wings.” — Mitchell Burgess, Northern Exposure