The funeral service for Siram “Si” M. Thompson of rural Northwood, Iowa, will be at 1:30 p.m. Friday at Silver Lake Lutheran Church, rural Northwood, Iowa. The Rev. Randy Baldwin will officiate. Interment will be in Silver Lake Lutheran Cemetery. Military honors will be accorded by the Emmons American Legion. Visitation will be from 4 to 7 p.m. Thursday at Bonnerup Funeral Service, and one hour before the service at the church. Si died peacefully at his home on Monday, March 5, 2012. He was 81. 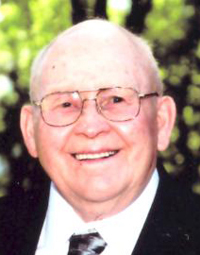 Si was born on June 1, 1930, on his home place in rural Northwood, Iowa. He attended rural country school. He was baptized and confirmed at Silver Lake Lutheran Church. At the age of 17, Si enlisted in the U.S. Navy. He was a gunner serving the country from 1947 until his honorable discharge in 1951. After returning from the service, Si returned to the home farm where he spent his life farming and raising dairy and beef cattle. He married Beulah Ashpole on Nov. 21, 1954, at Silver Lake Lutheran Church. In 2000, when Si retired from farming, he used his woodworking skills and began building a home “in the woods” for him and Beulah. Si enjoyed having coffee and talking with friends.

He will be greatly missed. Blessed be his memory.