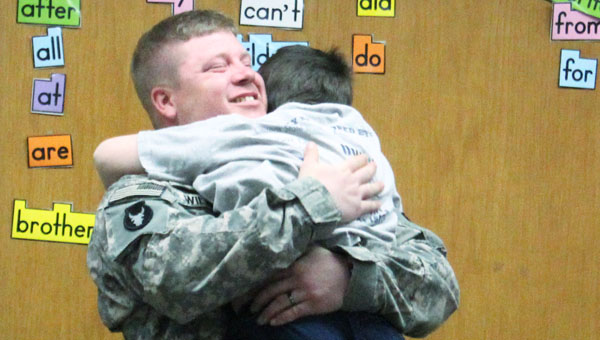 A Lakeview Elementary School first-grader got a special surprise Monday when he got to see his dad who has been deployed to Kuwait since July.

Spc. Shaun Willaby surprised his son, Carter, 6, at the school Monday afternoon. Carter seemed not to recognize Shaun at first, but then gave him a big hug.

“I was surprised,” Carter said. “I haven’t seen him in a while.”

They last talked about a week over over Skype, but otherwise Shaun hadn’t seen his son since he deployed last summer with Albert Lea’s Delta Company, part of the 2nd Battalion, 135th Infantry Regiment, within the 34th “Red Bull” Division of the Minnesota National Guard. Shaun, who’s originally from Emmons, flew into Minnesota Monday and said he’ll spend his two-week leave with family, friends and Carter. 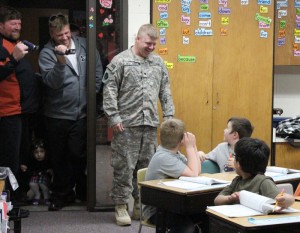 “I want to spend as much time with him as I can,” Shaun said. “I’m glad we have decent weather.”

Shaun first emailed Carter’s teacher, Laura Hillman, to see if she’d be interested in letting him surprise Carter on a school day.

“I was very excited, not only for the class, but for Carter,” Hillman said. “I think it makes them realize how fortunate they are to have their parents at home.”

After Shaun surprised Carter he took some time to answer questions from the class, and there were many. Some asked if he had used certain types of weapons like grenades, machine guns or driven a tank. Shaun answered that he had used grenades and guns in training, and that while he hadn’t driven a tank he drives large trucks for his unit. The kids also learned he’s been in the National Guard for 11 years and joined because he wanted to help during natural disasters like tornadoes or floods.

Shaun got to take Carter home after the surprise, and Carter said he was excited to spend time with his dad at his dad’s house. He’s been staying with his mom and Shaun’s parents throughout the deployment. Shaun said he was glad he got the chance to surprise Carter at school.

“I just thought it would be interesting to see his reaction,” Shaun said.

See a feature on Shaun and his wife, Leslie, being deployed together here.