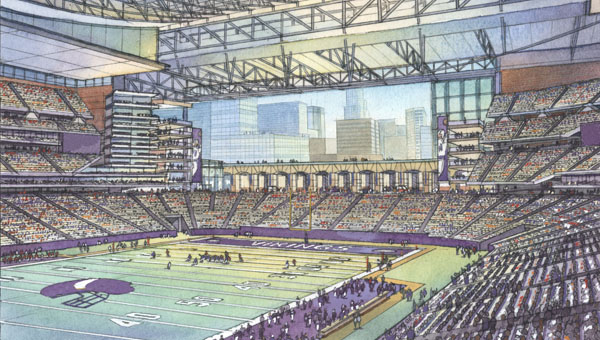 This rendering shows a bowl view of the proposed stadium. -- Minnesota Vikings

ST. PAUL — It has taken the Minnesota Vikings nearly a decade to get this far in their quest for a new stadium.

There is a lot more work to be done.

Gov. Mark Dayton and Vikings owners Mark and Zygi Wilf unveiled plans Thursday for a new, $975 million stadium that would be built nearly on top of the Metrodome site in downtown Minneapolis. The deal, assembled behind closed doors in recent weeks, was a key step toward getting a plan in front of state lawmakers and other civic leaders for approval. 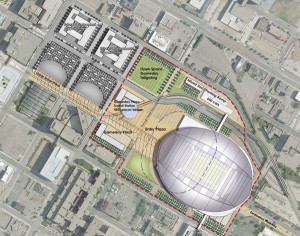 This rendering shows the site plan for the proposed Minnesota Vikings stadium. The purple dashed line shows where the Metrodome is presently.

Still, the plan is a far cry from becoming reality.

“Every single politician is now going to have to make a tough decision,” said Minneapolis Mayor R.T. Rybak, a stadium booster who must now persuade a majority of skeptical city council members to dedicate sales tax proceeds to the effort.

Also standing between the Vikings and a new stadium are 201 state lawmakers, all of them up for reelection later this year and many of them unconvinced that $737 million in public money should be contributed to the plan.

“I can’t see a way for me to vote for it,” said Sen. Jeff Hayden, a Minneapolis Democrat. “My constituents have weighed in consistently that they do not want public financing of private stadiums.”

Backers of the proposal said it would benefit not just the Vikings but the state of Minnesota. Under their deal, the team would collect all stadium revenue raised as a result of football games there. But the stadium would be owned by a new public entity that would keep all other profits, from other sporting events to rock concerts and the like.

The state’s share would come from authorizing an electronic version of an existing pull-tab gambling game played in bars and restaurants; the money would be raised from existing taxes on pull-tabs in the belief that the new version would increase gambling activity. The city’s share would come from a redirection of existing sales and hospitality taxes that currently fund the city convention center.

The NFL would have to approve any stadium deal, since part of the Vikings share would likely come from a league funding program to help build new facilities around the NFL. Mark Wilf said only that the team’s share was private.

Dayton, joined by the Wilfs, Rybak, lawmakers, business and labor leaders, rolled out the proposal at a Capitol news conference. The Democratic governor has pushed the project for months, touting what he calls a “people’s stadium” that could also be used for high school and college sports tournaments and special events; backers said it could also allow Minnesota to host national occasions like a Super Bowl and an NCAA Final Four.

Dayton has also said the new stadium would provide as many as 8,000 construction jobs, 5,000 related jobs for suppliers and others, and 2,000 permanent jobs. If approved this year, the stadium would aim to open in 2016; under that scenario, the Vikings would relocate for one season to the football stadium at the University of Minnesota.

While backers have sold the jobs potential, the underlying drive for most stadium backers has been fear that inaction could result in the Vikings leaving Minnesota for Los Angeles or another city. The team’s Metrodome lease is expired, and though they’re compelled to play the 2012 season at the 30-year-old facility, their future in the state is not assured.

“The time has come for Minnesota to make a decision,” said Rep. Morrie Lanning, a Republican and the chief House stadium negotiator. “Minnesota needs to decide if it wants to keep the team here. I do.”

Despite the new proposal, even stadium backers admit that will be easier said than done. A number of Minneapolis City Council members have gone on the record opposing rededication of the city’s sales and hospitality tax without a citywide referendum authorizing it. Rybak said he believed he could get the new plan past the council, but admitted it would be a tough sell.

“I see a huge number of red flags in the new plan,” said Councilwoman Betsy Hodges, who said she would not vote in support.

Dayton asked House Speaker Kurt Zellers and Senate Majority Leader Dave Senjem to commit to an “up or down” vote on the proposal, in both chambers before the session ends. Before that can happen, the proposal will be vetted in multiple House and Senate committees.

Zellers refused to say if he’d use the power of his office to push the bill through the Legislature this year.

“I’m a Vikings fan … I don’t want to see them leave,” said Zellers, a Republican. “That doesn’t mean we can put together a bad deal.”