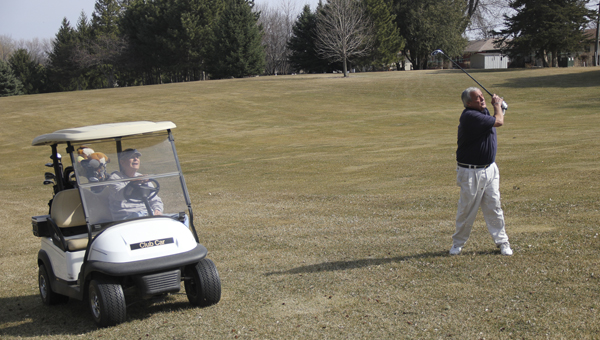 Jerry Tucci hits a ball from the fairway onto the green of Hole 12 during a round Thursday afternoon at Green Lea Golf Course. He called the unseasonably warm weather “wonderful.” Jack Briggs watches from the golf cart. -- Tim Engstrom/Albert Lea Tribune

Unseasonably warm weather has golfers hitting the links, but it also has golf course owners and managers smiling. 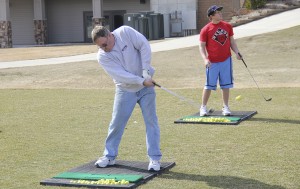 Randy Jensen keeps his head down Friday at the driving range of Wedgewood Cove Golf Club while hitting balls with his 19-year-old son, Jake, who was back in Albert Lea from Winona State University.

“It’s the best thing that can happen to Minnesota golf,” said Matt Hallman, manager of Oak View Golf Course between Freeborn and Alden.

He said golf in northern states usually suffers from having shorter seasons and, thus, less revenue than courses farther south. But with temperatures in the 60s and 70s daily, people are paying their greens fees and memberships early, which is good for the bottom line at all golf courses.

“Sunday was standing-room only. You had to wait to go,” Hallman said. 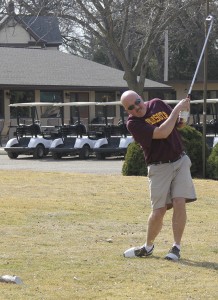 Scott Rasmussen tees off from Hole 13 on Thursday for his second round of the season. He parked the ball on the green 131 yards away.

Green Lea Golf Course in Albert Lea opened Wednesday. Owner Jeff Elseth said he usually opens the first week of April and even then it can be a chilly start.

“This is beautiful. This is unbelievable,” he said Wednesday. “It’s March 14th, and who would have thought we’d be playing golf in weather like this?”

The high temperature on Wednesday at the airport was 72, but the official records are recorded at the Wastewater Treatment Plant southeast of the city. That location recorded a high 67, breaking the Albert Lea record for March 14 of 64 degrees set in 1911. Thursday reached a high of 73, beating the record for March 15 of 68, set in 1927.

And with daylight saving time taking effect last weekend, the sun stays above the horizon longer after work. All the open golf courses experienced a crowd late in the day after regular work hours were over.

Elseth said the course at Green Lea came through in good shape even though there wasn’t much for snow cover much of the winter. Bitter cold wind can suck moisture out of plants, killing them in the winter if they aren’t protected under snow. He said the grass is brown, but it is “greening up” and “a little frost is coming out of the ground.”

“Hopefully, it’s going to be a great golf summer,” he said.

Randy Jensen practiced drives Thursday at the driving range at Wedgewood Cove Golf Club. He said he worries that an unseasonably warm March might mean an early onset of a hot, dry summer.

“I am hoping this doesn’t come back to bite us,” he said.

“If it is a slow spring, people don’t get the bug for golf until sometimes as late as June,” he said.

Wedgewood Cove opened Wednesday. He said some golfers just hit the course while some opted to warm up their game after winter by hitting balls on the driving range.

Teresa Klatte, co-owner of Clarks Grove Golf Course, said she is glad not merely for the sake of her business but for many reasons.

“It’s good for business, for human beings, for my flowers,” she said.