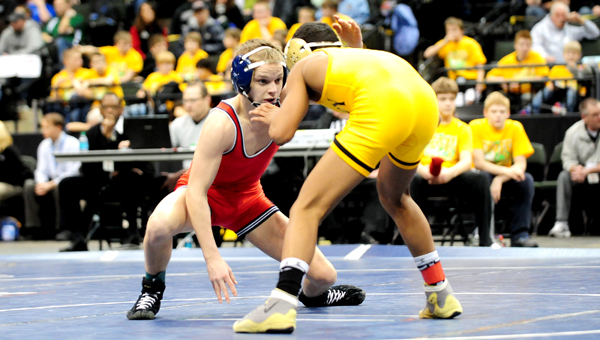 The Tigers replicated its success, too, sending three wrestlers on Saturday to the finals for the first time since it first wore the powder blue singlets 41 years ago.

Albert Lea junior Trevor Westerlund at 106 pounds, along with seniors Trey Hable (170) and Bryce DeBoer (285) each reached the finals of the Class AAA individual tournament at the Xcel Enery Center in St. Paul.

Westerlund was beat 8-6 by Apple Valley ninth-grader Maolu Woiwor, and Hable was edged 6-4 in overtime to defending state champion Kyle Begin of Anoka.

DeBoer concluded the tournament, in which five Tigers wrestlers placed, by winning the team’s first individual state championship since Ben Berhow did in 2006.

“I am so pleased with the way we wrestled up here,” Tigers coach Larry Goodnature said, following DeBoer’s unlikely title run. “It was an awesome tournament for us.”

Goodnature said the Tigers “roared back” as individuals after the team was ousted from the Section 1AAA team tournament in the semifinals. The team sent a section-high eight wrestlers to state, and its three state finalists were most in Class AAA besides Apple Valley, which qualified five.

“They came up here and they came to wrestle,” Goodnature said of his team.

Trevor Westerlund entered the tournament as the No. 1-ranked wrestler in the state beat East Ridge’s Reid Lyden 10-4 in the semifinals to earn a matchup with Woiwor in the finals.

Westerlund pinned Woiwor in their only meeting earlier in the season, but Woiwor overwhelmed his opponents en route to the finals.

The ninth-grader beat Owatonna’s Brandon Moen 17-0 in the quarterfinals before pinning fifth-ranked Blane Tschida of Coon Rapids in 33 seconds in the semifinals.

Westerlund trailed Woiwor 5-0 in the finals after giving up a takedown and two back points, along with an escape to start the second period. He said, following his, that he wasn’t aggressive enough and let Woiwor make the first move.

Westerlund became more aggressive in the second period, scoring six straight points on two takedowns and two backpoints to tie the match at 6-6, but Woiwor scored a reverse with two seconds left in the period and rode Westerlund the entire third period for the win.

Hable struck first in his finals match against Begin, who he lost to 7-4 earlier in the season, with a takedown to start the first period. Begin then scored an escape in the first and another in the second to tie the match at 2-2 heading into the third.

Hable started the third period down and came close to escaping with 15 seconds left when he stood up with his back to Begin but was thrown back onto the mat. In the sudden death one-minute overtime, Hable was again the aggressor, grabbing a hold of Begin’s left leg. When both wrestlers hit the mat, though, it was Begin who scored the two-point takedown for the title.

“I got the leg up but I rushed it a little bit and they called a fast two,” Hable said. “But it’s over now and there’s nothing I can do about it.”

Hable, the No. 2-ranked wrestler in the state, pinned Tommy Longendyke of White Bear Lake in 53 seconds in the semifinals and earned his first state medal by placing second.

“Making it to the finals was a big accomplishment, but I wish I would have won it,” he said.

Goodnature said it’s easy to second guess what you did in a loss in the finals, but both Westerlund and Hable wrestled great matches.

“They left everything on the mat and that’s all I can ask of them,” he said.

After cruising in the first round and quarterfinals, Dalton Westerlund ran into nationally-ranked and eventual four-time state champion Brandon Kingsley of Apple Valley in the semifinals.

Westerlund lost a 5-1 decision to Kingsley but pinned Cody Anderson of White Bear Lake in 5:33 for third place, the highest finish of his career.

“Obviously I was hoping I could win state, but I ran into a tough opponent,” Westerlund said. “Third place was the best I could have gotten, it was what I was aiming for.”

Despite finishing third, Goodnature said Westerlund was “definitely” the second-best wrestler at 160 pounds.

“He had a great tournament,” Goodnature said. “He had a tough draw with Kingsley, but he walked through the rest of them for third.”

After reaching the consolation semifinals, Wangsness dropped both his matches on Saturday to place third.

The junior fell 8-4 to Eden Prairie’s Ben Brancale, before dropping a 3-1 decision to Owatonna’s Evan Green in the fifth-place match.