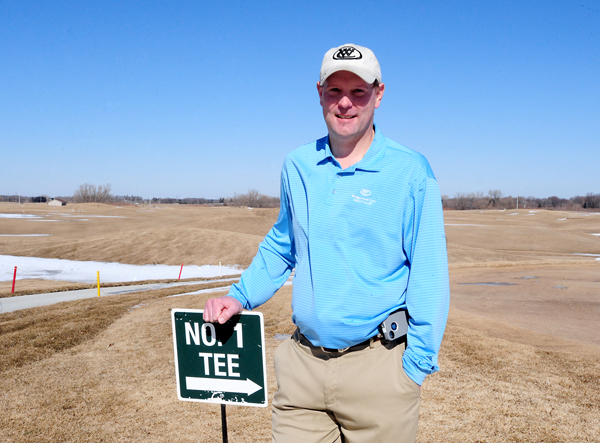 Donnie Teeter, above, the golf pro at Wedgewood Cove Golf Club, has set the course record at five different golf courses that he has worked at. Teeter played golf at Iowa State University and played competitively before beginning to teach in 2000. -- Brandi Hagen/Albert Lea Tribune

Donnie Teeter, golf pro of four years at Wedgewood Cove Golf Club, has been involved with the golf scene since he was about five years old.

Teeter grew up in Algona, Iowa, with school teachers as parents. When school was out for the summer, they would play a lot of golf and gave Teeter every opportunity to do the same.

Teeter played golf and basketball through high school and accepted a scholarship from Iowa State University to continue playing golf in college.

“It was a school I was excited to go to,” Teeter said. “I relished in it. I couldn’t wait to get to practice. Golf practice is not the same as football practice or basketball practice. You try and work hard, but it’s not blood, sweat and tears like some of those disciplines are.”

He and other golfers would spend every weekend on a golf course.

“It was, in a sense, my fraternity,” Teeter said. “That was my family away from home and that’s where I spent all my time playing golf, talking golf and I was in a golf discipline in my education.”

Teeter graduated from ISU in 1997 and stuck around to coach men’s and women’s golf. He then decided to turn pro.

In 1999, professional golfer Zach Johnson, who won the Masters Tournament in 2007, was going through qualifying school and Teeter joined as his caddy in Houston and Miami.

“I was looking to see what it was like,” Teeter said. “At that juncture, I said I’m done.”

In spring of 2000, Teeter started teaching lessons and put his clubs away competitively for the most part.

“I was logical enough to think if I did this for 20 years then at 40 years old it would be tough to get a vocation having never had a job per se,” Teeter said.

Teeter became a part of the Wedgewood team in May of 2008. Since working and playing golf there, Teeter has set the course record of 64. The record was added to a list of four others from courses he was previously employed at.

Today, his own family is his golf family. His wife, Angie, and their two boys, Drew, 7, and Noah, 4, join Teeter on the golf course.

“We get them out here regularly,” Teeter said. “My seven-year-old has played multiple 18-hole rounds this year with me. He’s got the patience and likes to be out here. Some days those golf rounds turn into looking for frogs by the pond and that’s fine, too.”

Teeter said he hopes to do the same as his parents did, give his boys the opportunity to play, but not force or push them if they don’t want to.

“It’s fun, but it’s not what I want on my tombstone,” Teeter said.

*at courses Teeter has worked at