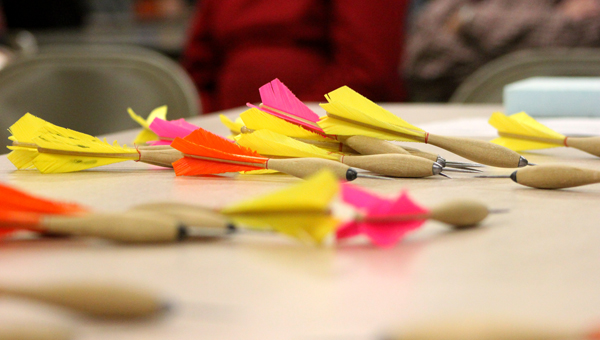 One-hundred and sixty-two men crammed into the dining hall of Emmons Lutheran Church for a pork loin supper made by Conger Catering before the top six teams of the season went head-to-head in the final games of the year.

The meal was paid for with a dime collection that added up throughout the season every time someone shot a dart outside of the ball field.

“That adds up I’ll tell you,” John Bromeland of United Methodist said.

During the meal, a hat was passed around and a total of $501.50 was collected. The dartball league will be donating the money to four area food shelves.

After the meal was served, jokes with the lead, “funny isn’t it” were told.

Two that really got chuckles were, “funny how we are thrilled when a baseball game goes into extra innings, but we complain when a sermon is longer than the regular time” and “funny how people want to be in the front at a concert but scramble to get a back seat in church.”

The league, which has been around close to 50 years ago used to be primarily Lutheran churches but has branched out to include others.

The season started in October and finished Monday with the tournament. The players ranged from age 17 to 90.

Even though it was a competition, it was three and a half hours of hooting, hollering and laughs.