Viola L. Mattick, 95, formerly of Kiester, died Wednesday, Feb. 29, 2012, at the Good Samaritan Nursing Home in Albert Lea. Funeral services will be at 11 a.m. Monday at the Mansfield Lutheran Church in Mansfield. Visitation will be from 2 to 5 p.m. Sunday at Bruss-Heitner Funeral Home in Wells, and will continue one hour prior to the service at the church on Monday. The Rev. Don Rose will officiate and burial will take place in Mansfield Lutheran Cemetery in Mansfield. Bruss-Heitner Funeral Home in Wells is assisting the family with arrangements. 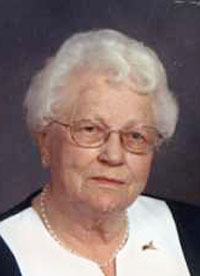 Viola was born on Jan. 13, 1917, in Foster Township, Faribault County to Emil and Emma (Huper) Meyer. She was baptized and confirmed in the Walters Lutheran Church. She attended school in the Kiester area. She married Clarence Mattick in Mansfield on Oct. 8, 1935, and they were blessed with six sons.

Viola and Clarence operated and owned the Mattick Farm for over 60 years. They moved to Kiester in 1982. Viola was an active member of Mansfield Lutheran Church. She was a charter member of the Altar Guild, Circle and the MLCW activities. She liked to help with the monthly Messenger and enjoyed talking about the past history of the area.