Emily Bernau and Jordan Bohonek of Austin were married at 2:30 p.m. Sept. 17, 2011, surrounded by their close family and friends, in the backyard of the bride’s parents home in Alden. The Revs. George and Jill Marin performed the double-ring ceremony. 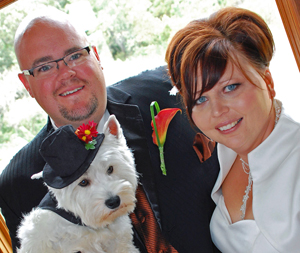 Assisting the couple on their wedding day were close friends: Glen and LeAnn Juveland of Albert Lea, Brandon and Andrea Harmdierks of Austin, Holly and Aaron Rocklin of Albert Lea, Amanda Thoendel of Iowa City, Iowa, Bill and Stephanie Weber of Stanchfield, Jessica Hodgson of Milwaukee, Wis., and Jeanne and Rick Herman of Emmons.

The bride and groom were accompanied down the aisle by their dog, Charlie.

A reception featuring the sounds of the Austin Big Band was held following the ceremony.

Following a honeymoon to Bora Bora, French Polynesia, the couple resides in Austin.