Tiffany Bratten and Ross Habben, both of Albert Lea, were married at 4 p.m. Sept. 10, 2011, at First Lutheran Church in Albert Lea. The Rev. John Holt performed the double-ring ceremony. 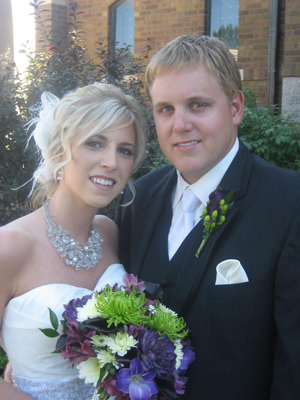 Parents of the groom are Darv and Marcia Habben of Albert Lea. Grandparents are Rod and Arlene Rollins of Waldorf and the late Herbert and Eileen Habben of Buffalo Lake.

Personal attendant was Shelly Egeness, cousin of the bride, of Burnsville.

Ring bearers were Payne and Payton Doyle, nephews of the groom, sons of Brett and Beth Doyle, both of Albert Lea, and Wally Egeness, second cousin of the bride, son of Bruce and Shelly Egeness, of Burnsville.

Guest book attendants were Tom and Kathy Jacobs, uncle and aunt of the bride, of Albert Lea. Scripture readers were Dr. Stephen and Margie Thorn, friends of the couple, of Albert Lea. Flower pinner and gift attendant was Lisa Fralick, aunt of the groom, of High Springs, Fla. Soloist was Jennifer Ordalen.

A reception and dance followed at Wedgewood Cove Golf Club in Albert Lea.

Tiffany is a 2004 graduate of Albert Lea High School and a 2008 graduate of St. Olaf College with a Bachelor of Arts in biology and biomedical studies. She is currently a fourth-year medical student at Des Moines University College of Osteopathic Medicine.

Ross is a 2004 graduate of Albert Lea High School and has his Associates of Arts Degree from Iowa Central Community College. He is co-owner and general manager of Aqua-Tots Swim School in Eagan and co-owner of Aqua-Tots in Scottsdale, Ariz.

The couple took a honeymoon to Kauai, Hawaii, following the ceremony and now reside in Rosemount.