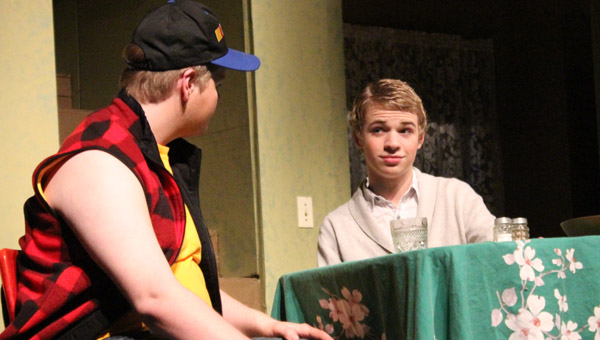 Students at Albert Lea High School are ready to make you laugh until you cry with their spring play “The Foreigner,” which opens tonight.

Teacher Molly Grimmius directs and said the comedic play is about a man named Charlie, played by Stuart Behling, who fears making conversation with strangers. His friend Froggy, played by Sergio Salgado, lies for him and tells everyone at the fishing lodge they’re staying at that he speaks no English. Then Charlie overhears some things he wasn’t supposed to, and you’ll have to attend a show to see how it plays out.

“I chose this play because it is one of my favorite comedies with great physical humor, mistaken identity and some great bits exploring interactions with foreigners,” Grimmius said.

Salgado said he hopes the public comes out to see the show, which they’ve been working on since March. Grimmius said she was impressed with the students because of the limited time for rehearsal for spring shows. 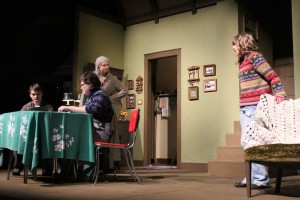 “We had a big turnout last year and we hope to do it again,” student Duncan Kromminga, who plays Owen Musser, said.

Working on a comedy also allowed Grimmius to help expand the actors’ abilities. She said comedy is not easy, and they had to work on comedic timing, facial expressions, dialects and more.

“I’m very pleased with my cast and crew,” Grimmius said. “They have been working really hard to put this production on in a very short time.”

“He had to add several tricks in it, which always makes it an extra challenge,” Grimmius said. “He is essential to the success of these shows, and I couldn’t do it without him.”

The show opens at 7:30 p.m. tonight, and continues with shows at 7:30 p.m. Friday and Saturday. Tickets are $5 for students, $7 for adults and can be purchased at the door. The show will be presented in the auditorium at Albert Lea High School.

What: ALHS presents “The Foreigner”