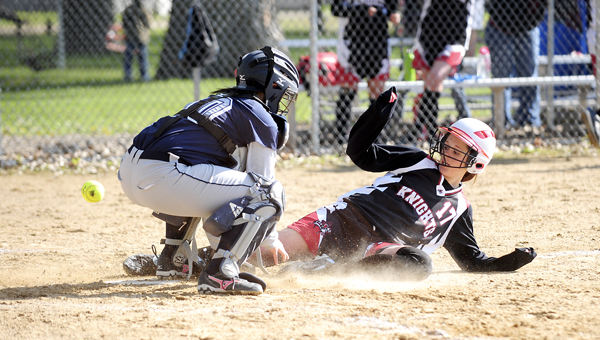 ALDEN — A homerun by Alden-Conger’s Nikki Schultz in the third inning bumped up the intensity of the game against Glenville-Emmons on Friday in Alden.

“It got us going offensively,” Knights coach Gary Nelson said. “The first time around everybody was having trouble. All of a sudden, the second and third times around, we just took off.”

Nelson said it took some time to get used to the Wolverine’s fast pitching because in Alden-Conger’s last game the pitching was slow. 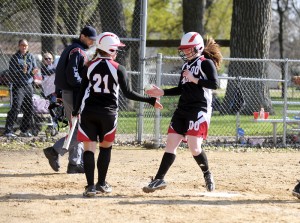 Megan Knutson and Nikki Schultz give each other a high-five in the bottom of the third after Schultz hit a home run that sent them both home.

The Knights held the Wolverines to just three batters per inning.

“We just played defense today,” Nelson said. “It was easy when Ali was throwing strikes.”

Ali Songstad helped the Knights to a perfect game by giving up zero hits, zero walks and striking out eight players.

Nelson said being aggressive on the base path also got the Knights to their win.

“I told them I was so proud,” Nelson said. “It is so rare that you get to participate in a perfect game, and it was fun.”

Lisa Ziebell, the Wolverines coach said even though the first two innings were good, she knew Nelson’s girls had potential.

“I knew it would just be a matter of time before they started hitting the ball,” Ziebell said. “We play each other a couple times a year so it’s a pretty good rivalry.”

Nelson said while Glenville-Emmons struggled with their hitting, he thought they had a sound defense. 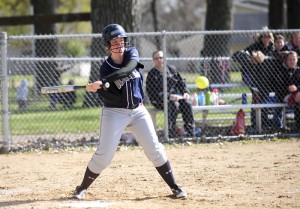 A Glenville-Emmons softball player swings at the ball on Friday in Alden.

“We just hit the ball where they weren’t today,” Nelson said.

Ziebell said it was easy to tell that Alden-Conger was out to win Friday’s game.

“You could see it in the girls,” Ziebell said. “They hit the ball well, and they hit it hard.”

She said something the Wolverines need to work on is getting their confidence levels up.

Glenville-Emmons will play at home against Hope Lutheran on Monday at 5:30 p.m.