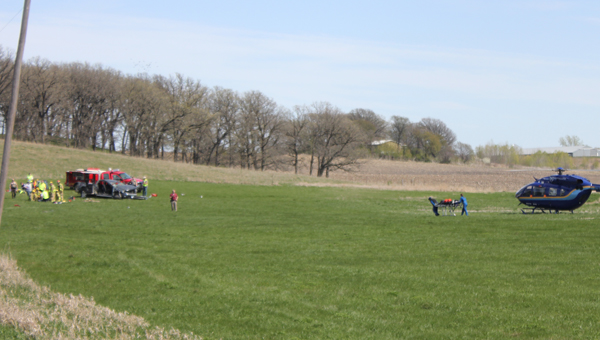 CLARKS GROVE — Five teens were injured around 2:30 p.m. Thursday in a rollover about two miles southwest of Clarks Grove.

A 2007 Chevy pickup driven by 18-year-old Andrew Peter Borland of Albert Lea rolled several times upon entering a ditch off 270th Street. Borland was airlifted from the scene by a Mayo Clinic helicopter, but his injuries were not life-threatening, according to the Freeborn County Sheriff’s Office.

The four other passengers injured were Lewis Warren Kelly, 16, Isaac Marlowe Melankton Olson, 18, Dominic Francis Sargent, 17, and Levi Colton West, 17, all of Albert Lea, according to the Freeborn County Sheriff’s Office. They were all transferred by ambulance to Mayo Clinic Health System in Albert Lea, and their injuries are not life-threatening.

As of this morning Borland is in fair condition and Olson is in serious condition at St. Marys Hospital in Rochester.

The rollover happened near the intersection of two gravel roads: 270th Street and 750th Avenue. The vehicle had been traveling east when it left the roadway and went into the south ditch. Preliminary investigation shows the vehicle was traveling at excessive speeds when it left the road, according to a press release from the Freeborn County Sheriff’s Office.

No occupants of the truck were ejected, and authorities believe they were all wearing their seat belts. There was no indication that alcohol was involved in the crash.

The driver and front seat passenger were extricated from the vehicle by the Albert Lea Fire Department, while the three in the back seat could climb out the window of the pickup’s cab.