A good song is like a good story — worth repeating

“Everything is nearly copacetic. I’ve been hanging around Still Bill — he makes more dust than miles. He’s a serial loiterer. He claims to be a higher life form, but prime rib has more life. Still Bill wasn’t born lazy. He’s had to work at it. He makes me feel as if I have too much ambition. I’m a ball of fire. His brother got all of the ambition in that family. His brother has done well in life. We all knew he would. He was the first to finish his lamp in junior high shop class. He’s a working fool. Still Bill, not so much. I know all the movement in the world isn’t forward, but Still Bill spends more time in the hay than a Kansas pitchfork. Still Bill hasn’t been the same since his big invention failed.”

“What big invention was that?” I wonder aloud.

“Oh, he and your neighbor Pat Pending, the inventor, had a plan that was as simple as Still Bill, but unlike Still Bill, the plan might work. They came up with a formula that would grow hair on a doorknob. They thought they’d become filthy rich, but their product didn’t sell.” 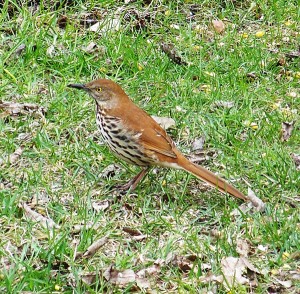 Photo of a brown thrasher by Al Batt.

I stepped outside on Easter morning. It was a beautiful day made even more beautiful by the song of the brown thrasher. It was the first day I had heard the thrasher repeating itself in 2012. Its vocal repertoire features phrases reiterated twice. A good song is like a good story — worth repeating.

Free as a bird

I’ve been called a birdbrain. I take it as a compliment. Birds are not stupid. Free as a bird. I hear that often. We think of birds as having stress-free lives. They don’t. Think about it. It’s not easy being a bird. Let’s pretend that you are a bird. Your neighbors all hate you and try to beat you up if you even so much as step onto their property. And to make matters worse, the property lines have never been surveyed. You have to build your own home without the aid of blueprints or contractors. The only help you receive is from your spouse and that’s not always much help. Your offspring take the food right out of your mouth. You don’t receive a single frequent flier mile. Then there is the thing that makes you nervous — you taste just like chicken.

“Do plastic owls work in discouraging birds?” They do. Sometimes for as long as a few days. Sometimes for as long as 15 minutes. An owl effigy works to block a nesting area, but so would a stuffed monkey or a plastic shopping bag. Birds quickly figure out that it is not a real owl. I have seen a crow, mourning dove, robin, grackle, etc. perched on such owls. I’ve watched a flicker hammering on a plastic owl, attempting to turn it into a resonant instrument for declaring territory. Some of the owls are nicely done, but unless you are collecting artwork, save your money.

“Why were there so many snowy owls here this winter?” I was fortunate enough to see a number of snowy owls this year. This owl is easy to find in the winter. I just look for snow that blinks. The movements of snowy owls are influenced by the boom and bust population cycles of lemmings, which are snowy owls’ main food source. The clutch size of this species is directly related to the availability of prey. In years of prey abundance, the snowy owl lays a large clutch of eggs, with as many as 16 being recorded in a single nest. Lean times reduce the clutch size dramatically.

In years when lemmings are scarce, owl breeding activity sometimes ceases. There was an abundance of lemmings this year, so many lemmings that the owls laid more eggs in response. This resulted in more young owls than available territories and in some areas, food, so the owls headed south. The owls are attracted to open treeless places that resemble their breeding grounds on the tundra. One snowy owl landed at an airport in Hawaii. While in Minnesota, successful snowy owls learn that voles are good eating. Those owls that that are unable to discern the vole as a prey item starve.

Saguaro National Park announced that it would no longer host sales of disposable bottled water or soda. This follows a similar move by Grand Canyon National Park. Saguaro is in southern Arizona and is home to the endangered lesser long-nosed bat and the threatened Mexican spotted owl. EPA data estimates that less than 15 percent of plastic water bottles are recycled. A more sustainable solution is to provide water bottle filling stations at which visitors refill their own reusable containers. The park sells reusable, BPA-free water bottles in its visitor centers for $1.99. The cost of a refillable bottle is a bargain considering bottled water from a vending machine costs $1.25.

To a turkey vulture, a highway is a lengthy dinner plate.

A black-capped chickadee banded in Minnesota was 11 years, 2 months old.

Robins migrate north at the 37 degree isotherm, with the males returning first.

A female bat that is nursing young can eat her weight in insects each night.

At up to 110 feet in length and 200 tons or more in weight, the blue whale is believed to be the largest animal ever to have existed.

Bill Taddicken, the manager of Audubon’s Rowe Sanctuary in Nebraska, said that a friend of his feels that reality shows are the best things on TV. They make people go outdoors.

“A person without a sense of humor is like a wagon without springs — jolted by every pebble in the road.” — Henry Ward Beecher

“We kill all the caterpillars and complain that there are no butterflies.” — John Marsden