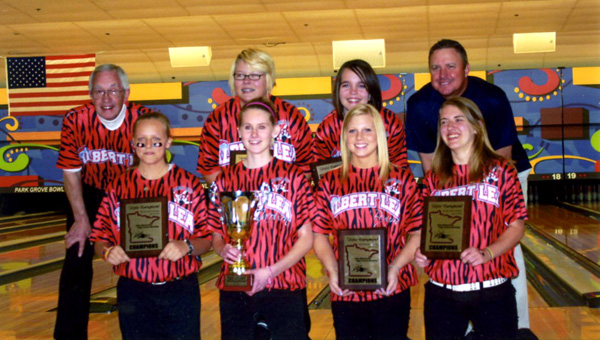 Six area high schoolers made up the Albert Lea girls’ bowling team that was named state champion on April 21 in St. Paul.

Out of 33 teams, Albert Lea came out on top with an average of 179. The girls bowled in a total of 25 games to earn their title.

Having a girls team compete in the girls’ high school bowling competition is fairly new for Albert Lea.

While many of the players had played on a co-ed team previously, the girls’ team was only formed last year and they bowl by the baker system that college teams use. In the baker system, five bowlers each bowl two frames to complete a single game.

Bowlers from the Albert Lea, Mankato, Austin, New Richland, Kiester and Owatonna areas make up two Tiger teams. There are six bowlers on the “A” team and eight bowlers on the “B” team.

Last year the top team was close to the championship, but ended up in second so this year they made it their goal to make it to the top.

“It took a lot of dedication,” Tigers coach Loren Kaiser said. “We practiced every week on Wednesdays for two hours and a lot of them are here a lot more.”

The high school bowling season runs from January to mid-April.

Jacobson said at one point the championship came down to her getting a turkey, or three strikes in a row, to win and she did.

“It was absolutely awesome,” Kaiser said. “They performed like troopers.”

Because bowling is not only a physical sport, but also a mental sport, Kaiser said he makes the girls do odd things during practice like only hitting a certain pin or having to hit a sticky note in order for practice to be over.

“It’s to get them ready for when they’re under pressure,” Kaiser said.

Kaiser has been coaching bowling for nearly 20 years and said coaching the girls has been extra special to him because his granddaugther Paige Boyum is participating.

Lauren Schabert, a bowler from Austin, said bowling at the championship was nervewracking, but the team was confident they could win.

“Everyone else worked just as hard and seemed like they wanted it just as bad so it was awesome to come out on top,” Schabert said.

They were confident because they were taught to have that mindset.

Kaiser said he had showed the girls a video of college bowlers who never sat down the entire time they were bowling. Mimicing the college bowlers, the Tigers don’t sit down when they are competing and give “high-tens” to their teammates each time after they bowl and an air “high-ten” to their family and friends in the crowd.

On top of their state championship title, the Tigers won the all-conference title a day later.

Like any sport, for athletes who do well scholarships are available.

“It gives them a little incentive,” Kaiser said.

He said so far Jacobson has received a call from the University of Texas who wants her to attend as a bowler.