A.L. man to lead division split off from IBM

An Albert Lea business man is to become the CEO of a retail sales company made from a division broken off from IBM.

In fact, he already leads that division. 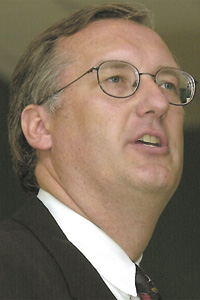 Steve Ladwig is the general manager of a division at IBM called Retail Store Solutions, which presently employs about 1,000 workers and makes software and hardware for point-of-sale systems in America and worldwide. Big Blue announced last week that it would sell the division to Tokyo-based Toshiba TEC Corp., a maker of point-of-sale systems for retailers, largely across Asia and the Pacific. The purchase price of 80 percent of the division is $850 million and gives the Japanese company a global consumer base.

The news release from IBM did not state what will happen with employees in Rochester. It did state that Ladwig will become the head of the new Toshiba TEC-owned U.S. company based at the IBM campus in Raleigh, N.C. Big Blue retains a 20 percent stake in the company to ensure a smooth transfer.

With the sale, Toshiba TEC enters into a multi-year agreement with IBM to participate in its Smarter Commerce initiative, which aims to integrate customer traits, sales technology and corporate operations to find efficiencies. Toshiba TEC will acquire the operations, development and sales of Retail Store Solutions.

In three years, Toshiba TEC will purchase the remaining 20 percent stake. Toshiba TEC is a subsidiary of the Toshiba Corp.

According to the Rochester Post-Bulletin, Ladwig joined IBM in 1979, rising to become the company’s top executive in Minnesota. He left in 1998 to lead a computer storage company based in the Twin Cities and came back to IBM in 2001.

The Retail Store Solutions division, according to IBM, produced revenue of $1.15 billion in 2011. The move continues IBM’s trend of selling off hardware aspects of the company as it focuses on software and business services. Also, industry experts say the future of consumer purchases will be via smart phones and other handheld devices.