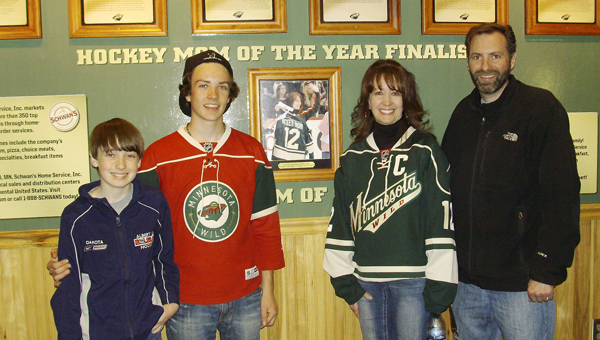 Cindy Callahan was chosen as the Wild Hockey Mom of the Year on April 5. Callahan stands with her sons Dakota, 12, Logan, 16, and husband David in front of the display in Section 207 at the Xcel Energy Center.

“Hey Wild fans, it’s time to drop the puck. So everybody say it with me, let’s play hockey!”

Cindy Callahan of Clarks Grove made the announcement at the Xcel Energy Center at the start of the Minnesota Wild’s home game against the Phoenix Coyotes on April 7.

Shy by nature, Callahan said she “gave it all I got.”

Callahan, an accounting manager at Innovance, was chosen as the Wild Hockey Mom of the Year on April 5.

Callahan has been a hockey mom ever since her 16-year-old son Logan started playing with the Albert Lea Hockey Association 11 years ago. Her younger son Dakota also plays.

The nomination process for the contest started last fall. Callahan submitted a letter saying why she should be chosen.

In January, a Wild representative called Callahan and invited her to the Jan. 10 game against the Chicago Blackhawks to be the Hockey Mom of the Day.

“I thought it would end there,” Callahan said.

But, in February a representative called and told her she was chosen as the Hockey Mom of the Month for January and invited her to another game.

“What are the odds,” Callahan said.

For the second to last home game, six hockey moms, one for each month in the hockey season, were invited to the Xcel Energy Center. They were told one of them would be chosen as the Hockey Mom of the Year.

During the second intermission they filed out onto the ice.

“I was just blown away by the whole thing,” Callahan said.

Callahan said the women were told if they won they would make the announcement at the April 7 game and also receive an autographed item from Nordy the Wild mascot.

The item ended up being a Wild’s jersey with the name “hockey mom” and the number 12 on the back.

Month by month mothers were introduced and asked to open a large envelope. Starting with the hockey mom of October, the mothers opened their envelope toward the crowd.

The first three mothers were not holding the winning envelope.

“I thought, I wonder what’s going to happen,” Callahan said.

As she opened her envelope, Callahan said she could hear the crowd. The woman announcing said, “you’re a winner!”

“My first thought was I can’t believe it,” Callahan said. “I was honored. Out of all the hockey moms to get picked, it was pretty fantastic.”

As Nordy handed the jersey, Callahan said she waved to the crowd.

“It was across the whole state,” Callahan said. “I’m really honored.”

Callahan said being a hockey mom is a big commitment so it’s great that the moms are honored by the Wild.

Callahan said she has had a lot of memories with her boys through hockey.

“There isn’t one defining moment, but when they first started learning how to skate, I could always keep up with them. Then it got to the point that they can go backwards faster than I can go forward,” Callahan joked.

“Every season I look forward to it. The winter goes so fast.”

Callahan’s picture can be seen hanging in the 2011-12 Hockey Mom Hall of Fame display in Section 207 at the Xcel Energy Center.

The Hockey Mom Hall of Fame was sponsored by Schwan’s and the Minnesota Wild.