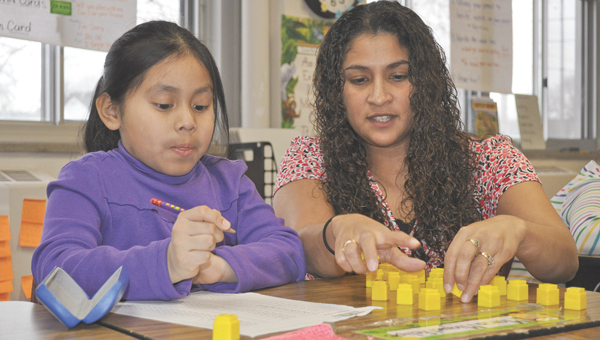 Austin Success Coach Chrissy DeLuna helps Neveln Elementary School second-grader Maria Miguel Felipe on a math exercise earlier this year. The Success Coach program is considered an educational success in Austin and Albert Lea, but the state integration revenue used to fund the program could be in jeopardy this legislative session. — Trey Mewes

Maria Miguel Felipe looks a bit nervous before the exercise as the class raises their arms, ready for the minute-long math quiz to begin.

The objective is to complete as many addition and subtraction problems within the time limit.

When the exercise starts, Felipe is ready. She has some help from Chrissy DeLuna, Neveln Elementary School success coach.

Albert Lea adopted the Success Coach program in 2009 after hearing about the work Austin’s success coaches did.

The program is one of the largest positive educational stories out of Austin in recent years, ranking high among district initiatives.

Success coaches in Austin help students new to the district succeed, whether that’s assisting a bilingual Hispanic or Sudanese student with classes, translating for parents who don’t speak English, or bringing new students and students from other countries up to speed on their lessons.

“The success coaches are viewed as very welcoming by all the groups that we’ve talked to in our community,” said Kristi Beckman, Austin’s integration coordinator. “That would be one of the biggest things that we’ve done.”

In addition, Austin uses integration funding for speakers like Naomi Tutu and Minnesota Supreme Court Justice Allen Page, as well as community films, field trips, and academic opportunities like bringing Austin and Albert Lea High School students to Mankato State University for a Latino career day in engineering programs. In addition, both districts fund after school opportunities which allows more students to come together for opportunities. The goal is to give students opportunities to learn from and with each other, as well as to bring students of all walks of life together.

That’s part of the reason why Albert Lea and Austin partner with Southland, Hayfield and as part of the Southeastern Minnesota Integration Collaborative. The collaborative shares resources between districts and offers partnership opportunities like foreign language pen pals and lesson sharing. Several districts, such as Albert Lea, are voluntary partners with Austin, which was tasked by the Minnesota Department of Education in 2006 to put together an integration plan in response to the district’s increasing population of students of color.

“All of the initiatives, the partnerships have been a wonderful opportunity, as we’ve learned a lot from what Austin has been doing,” Knudtson said. “It’s a good opportunity for all of our students and their parents when we can work together with other districts.”

Yet those partnerships will be put to the test this legislative session. Republican lawmakers tried to redefine integration funding last year during the 2011 shutdown battles so integration money could be spread around the state more evenly. Twin Cities school districts, which have a larger population of students of color, receive the majority of integration funding at the moment and lawmakers say the funding program isn’t doing enough to help decrease the increasing achievement gap between white and non-white students.

“The important thing is we spend the dollars on things that work,” said Rep. Pat Garofalo, R-Farmington and chairman of the Education Finance Committee. Garofalo and other legislators will hear from state Department of Education officials as part of the Integration Revenue Replacement Task Force on Feb. 15 to hear their proposal on how the integration revenue program should be changed.

Task force members have looked at ways to improve student achievement and forced busing, according to Garofalo. While Garofalo said Greater Minnesota could have increased funding under the new program, educators won’t hold their breath until Legislators decide what to do with the current program.

Projections for race
• The percent of Minnesota’s population that is nonwhite or Latino is projected to grow from 14 percent in 2005 to 25 percent in 2035.
• The numbers of Latino, black and Asian Minnesotans are projected to more than double over the next 30 years.
• The white population is projected to grow slowly and will decline in some parts of the state.
•  All regions of the state will become more racially and ethnically diverse than they are now.
— Minnesota State Demographic Center, issued June 2009

Projections for education
• Minnesota K-12 school enrollment, including both public and nonpublic, is projected to rise about 7 percent between 2008-2009 and 2018-2019.
• K-6 enrollment is projected to increase each year, with a total gain of 11 to 12 percent over 10 years.
• Enrollment in grades 7 to 12 is projected to fall until 2012-2013, and then rise slightly.
• Two alternative projections give similar results for total and public enrollments.
— Minnesota State Demographic Center, issued June 2009