The funeral service for Ardella Schroeder-Olsen will be at 11 a.m. Friday at the LeSueur River Lutheran Church in New Richland. The Rev. Paul Meierding will officiate. Visitation will be from 5 to 8 p.m. Thursday at Friedrich Funeral Service as well as one hour prior to the service at the church. 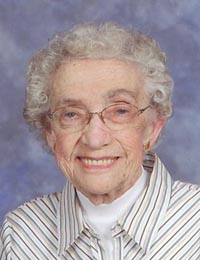 Ardella Schroeder-Olsen passed away peacefully on April 16, 2012, in Waseca.

Ardella Eleanore (Reese) Schroeder-Olsen was born on Dec. 1, 1918, along with her twin, Ardis, in Waseca County. She was baptized at LeSueur River Lutheran Church and attended District No. 8 Public School. She attended Bible school and was confirmed at the Evangelical Lutheran Church in Hartland. She attended New Richland High School for one year, and finished in Ellendale, graduating in 1937. Graduating from high school was something she was very proud of and she would bring it up often. She was also proud of the fact that her mother was a twin and, of the nine siblings, there were two sets of twins.

In April of 1938, she married Alvin Carlson at the Associated Church in Owatonna. They were the parents of four children: Richard, LaVon, Eugene and James.

Ardella married Walter Schroeder on New Year’s Eve in 1954.They had one son: Steven Schroeder. They started farming in Clarks Grove and moved to New Richland and continued farming until 1969. They operated the APCO station in New Richland for 15 years. She also worked at Brown Printing for 20 years before retiring in 1981. She was widowed in 1982.

Ardella met and married Cortes Olsen in 1987. They traveled extensively during their years together and were married 12 years before his death in 1999.

Ardella will be missed by all who loved her. Sweet rest in Heaven, Mom.