Art around the world 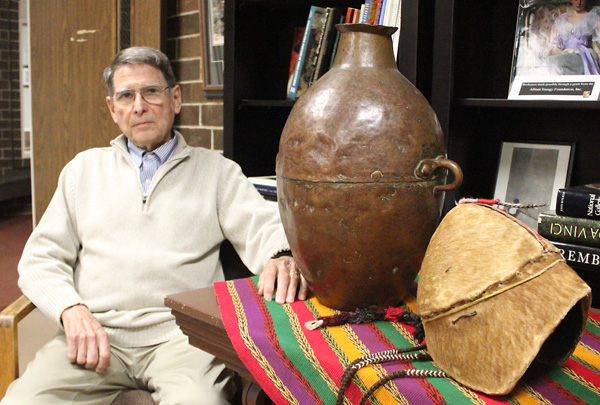 Thoburn Thompson sits near a few of the artifacts he’s loaning the Albert Lea Art Center for its next show. The open house is from 1 to 3 p.m. Sunday. -- Kelli Lageson/Albert Lea Tribune

The Albert Lea Art Center will host an unusual collection for its next art show — a private collection of art by people who don’t consider themselves artists or collectors.

Retired Dr. Thoburn Thompson said he and his wife, Marge, have been members of the art center for quite some time and while attending a recent art show he was asked if he’d be interested in having his own collection featured.

“I was taken aback — we’re not artists,” Thompson said.

And while he might not think so, they are prolific collectors of art. Sculptures, photos and paintings fill the walls of the art center as it is preparing for an open house Sunday.

Much of the pieces come from South America and around the globe, since the couple had been avid travelers and missionaries in Bolivia.

Thoburn, who was born in California, met Marge, who’s from Millaca, at the University of Minnesota. They married while he was in his surgical residency at Dartmouth College in New Hampshire. After he was board-certified they both decided they’d like to be missionaries through the national United Methodist Church. They trained in Costa Rica and New York and then worked at a hospital in La Paz, Bolivia. Marge was a nursing educator, and he worked as a surgeon. During all their travels they collected pieces they liked or were given as gifts.

“We lived for seven years in South America and went back many times,” Thompson said. “On a modest income we just picked up stuff.”

Much of their collection has a Latin American theme, but there are other pieces as well. One of Thompson’s favorite pieces is a photo his son Ian took of two little girls in Bolivia.

“That was something special for us,” Thompson said.

After their missionary work the Thompsons lived in Albert Lea where Marge is well-known as a volunteer with various organizations like the United Methodist Church, League of Women Voters and the Albert Lea school board.

The show somewhat came about because Thompson will be leaving his home, as Marge can no longer live there because she’s coping with Alzheimer’s disease.

“In a sense we’re letting people into our home,” Thompson said. “It’s just stuff we picked up over the years that we like, and we’re both privileged to share it.”