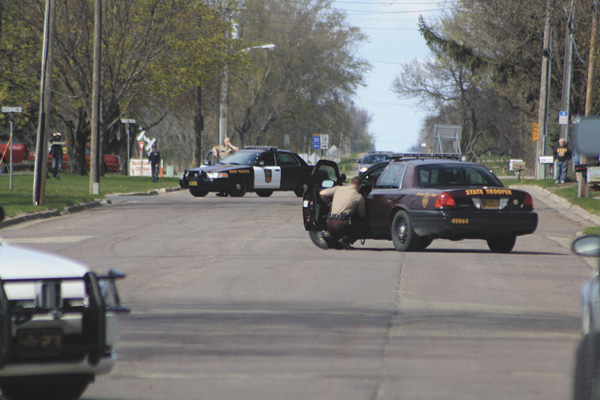 A Minnesota state trooper hides behind the door of his Ford Crown Victoria during a standoff Sunday in Blooming Prairie. -- Adam Thompson/Albert Lea Tribune

BLOOMING PRAIRIE — A Blooming Prairie man who at first police believed was brandishing a gun in his yard has been released after he was taken into custody Sunday after, Blooming Prairie police are reporting.

The man, identified as Gary Christiansen, was reported to the police by a neighbor who said that Christiansen was waving a gun around in his backyard.

Peterson said that the Blooming Prairie police took the report seriously because Christiansen, 63, was convicted in 1994 of first-degree assault and weapons charges for an incident in 1993 in which he shot the city’s police chief.

Because of the potential volitility of the situation, the police evacuated the neighborhood, set up a perimeter around Christiansen’s house and called for backup from the Steele County Sheriff’s Office and the South Central Drug Investigation Unit SWAT team, Peterson said. Police were unsuccessful in their attempts to coax Christiansen out of the house, he said.

“The SWAT team was ready to go in when a gal showed up who knew him,” Peterson said, “and she called him on his cell phone.”

At that point, Christiansen surrendered and police took him into custody.

Christiansen, however, produced a letter from the Department of Corrections that indicated that he was no longer under supervision and that he was now authorized to vote, to hold public office and to carry a firearm. The law has changed since that time, Peterson said, making it illegal for Christiansen to have the gun. However, it was doubtful that Christiansen would have known about the change in the law, so he was not charged with having the gun in his possession. Still, the police kept both the gun and the ammunition.

As for the original report that Christiansen was waving a weapon in his yard, police subsequently learned that the neighbor making the report suffers from dementia.

“We don’t believe he (Christiansen) was brandishing a weapon,” Peterson said.