Break down the walls made by labels

It’s OK to be different. Be who you are and be proud! 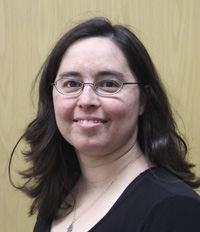 This is one belief I’d like to pass on to my 2-year old daughter as she grows up. I lived this belief recently, as I found myself clapping at the end of my pastor’s sermon.

Clapping at the end of a sermon was odd for two reasons. One is that it doesn’t seem to be the local tradition to clap after a sermon, and the second is that I’m Jewish. One hundred percent (or almost, but that’s another story) born and raised Jewish.

The pastor whose sermon I applauded is Tom Biatek, of the United Methodist Church in Albert Lea. I am proud to claim him as “my” pastor, just as I claimed John Bromeland before his retirement.

My daughter and I attend church to support my husband, who is Christian and sings in the Methodist choir. I also participate in the church by playing handbells.

On one recent Friday night, we were putting our daughter to sleep after having visited her paternal grandparents, aunties, uncles and cousins, a Friday tradition when we’re not attending synagogue. That night, I was saying the prayer for the coming of Shabbat, and for a moment, forgot the Hebrew words. My Christian husband chimed in with the “L’hadlik Ner” that I had forgotten. 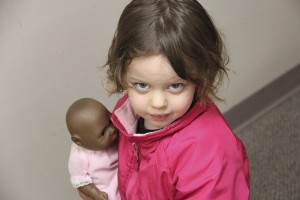 Being an interfaith family works for us. We recently traveled back to Michigan to celebrate Passover with our daughter’s maternal grandparents, whom she calls Bubbie and Googie. How lucky she was to sit at a table, rich with history, tradition and family who came from Kentucky, Florida, Texas, Minnesota and Michigan to be together.

For her to be around the seder table, participating in this ancient ritual, was important to me. To her, she was just happy to be with everybody, watch all the commotion, drink grape juice, eat matzah, try new foods and sing Dayenu. She heard the four questions recited out loud at the seder table in English, Hebrew and Yiddish.

The Yiddish was in honor of her great-grandfather, her namesake, Albert. We all giggled as we recalled my Papa’s translation of reclining to tziknaytched in Yiddish. My mom commented on how he would have loved to sit next to her at the table. He always loved a good eater, and his great-grandaughter Anais certainly fits that criteria.

Returning home to Minnesota, we planned a late Easter celebration with family here. Grandma Clara, Anais’ Christian, Norwegian great-grandmother, for whom she is also named, would have loved to have been there, watching the children.

Back to the reason I was clapping for Pastor Tom’s sermon. He prefaced the sermon with a reminder, one that we could all benefit from. The reminder was not to classify, stereotype or vilify a group of people based on a few. The Biblical passage he was referring to was one from the book of John where Jesus’ disciples are hiding in a room, with the door locked to protect themselves from “the Jews.”

Tom spoke of how this passage has been used in the past to condemn Jewish people and has been twisted and used as a means of persecution. I know this in my body. Easter has never been an easy time for the Jewish people, and I will admit it was hard to step into and be comfortable in a church when I first met my husband.

I think of my great-grandfather’s family, killed in the Holocaust. I think of people of color, being fearful while going about their daily business. I think of Muslim people crossing the border between Windsor in Canada, and Detroit in the United States dressed in hijab (traditional head covering) and being detained and interrogated simply for being Muslim.

I am grateful for pastors John, Tom and the people of the United Methodist Church for so graciously welcoming me, yet also respecting that I practice a different religion than they do.

I am grateful for Pastor Tom speaking about his fellow African American pastor who was followed in the grocery store to make sure he didn’t steal anything, simply because he was black. I am grateful that our community cares enough to speak about discrimination and continues to educate and work towards an inclusive community.

My daughter Anais Clara defies singular categorization. She comes from a Jewish mother from a big city, a Methodist father from a small town, from ancestors from Poland, Ukraine, Russia, Romania, Belgium, Hungary, Bohemia, Norway, Ireland and Germany. She sees none of these labels, knows not what they mean and does not yet inhabit them.

As she comforted her baby doll in church, the one with black skin, she reminds us of the best of the human spirit. That is to love one another, to welcome diversity in race, ethnicity, age, gender, sexual orientation, religion, and disability. To see the divine in all people, and to respect those who don’t believe as you do. To break down the walls that separate “us” from the “other,” and to proudly claim who you are, even when it’s not easy to do so.

Taryn Israel Nechanicky is a member of the Human Rights Commission of Albert Lea.