The funeral service for Crystal B. Peterson of Twin Lakes will be held at 1:30 p.m. Thursday at First Lutheran Church, Glenville. The Rev. James Rushton will officiate. Visitation will be from 4 to 7 p.m. Wednesday at Bonnerup Funeral Service, Albert Lea and one hour before service at the church. Interment will be in Greenwood Cemetery, Glenville. 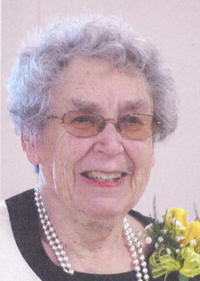 Crystal was born in Northwood, Iowa, on April 5, 1931, the daughter of Julius and Ruby (Peterson) Hauge. She graduated from Northwood High School. Crystal was married to Palmer Peterson on Feb. 1, 1952, at First Lutheran Church in Albert Lea. She was a member of First Lutheran Church in Glenville and also was in the church circle group. Crystal worked for Schulties Convenience Store in Albert Lea and later worked for 19 years baking pies for Trumbles Restaurant. Crystal was known for her wonderful pies. She enjoyed making lefse, gardening, fishing, embroidering and spending time with family and friends.