Funeral services for Dorothy Clara Johnson, 75, of Clarks Grove will be at 10 a.m. Monday at Bayview/Freeborn Funeral Chapel. The Rev. Kent Otterman will officiate. Interment will be at Graceland Cemetery. Visitation will be one hour prior to the service. To sign the guest book, go to www.bayviewfuneral.com. 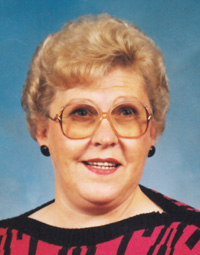 Dorothy passed away peacefully Wednesday, April 18, 2012, at her home.

Dorothy Clara Johnson was born on Nov. 23, 1936, to Marinus and Egbertha Johanna (Dykhuisen) Verhey in Rock Valley, Iowa. She moved with her family a few times through Iowa before settling near Madison, S.D., where Dorothy grew up and attended school. In June of 1954 Dorothy married Alden Kvenvold at Lake Madison Lutheran Church in Madison, S.D. The couple came to the Blooming Prairie area and then Albert Lea. Dorothy worked at Land O’ Lakes and on the paint line at Streater’s, retiring in 1998 after 29 years. She was a former member of the Assemblies of God Church. Dorothy enjoyed reading books, magazines and newspapers. She was very interested in local and national politics and was an avid follower of the Minnesota Twins. Dorothy treasured the time spent with her family and followed all of her grandchildren’s activities and interests with pride. Blessed be her memory.