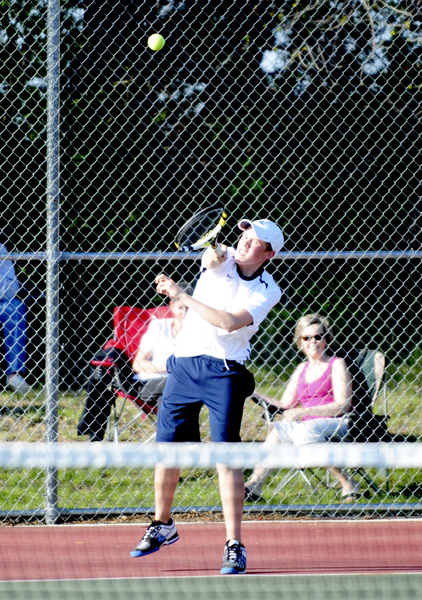 The Tigers’ Carter Dahl serves the ball during the second set against Mankato East on Tuesday in Albert Lea. -- Brandi Hagen/Albert Lea Tribune

According to Tigers coach Wayne Prudoehl, Tuesday’s game was Shaft’s first on varsity.

“I was impressed with his net play,” Prudoehl said. “He had an aggressive mentality out there.”

Prudoehl said most of Shaft’s net play was set up by Jahnke’s serve.

“Collin ended the match with two outstanding serves, one being an ace.”

The improvement from the No. 2 spot to No. 1 by the doubles team of Zogg and Dahl also impressed Prudoehl.

“Carter had excellent pop on his serve, and Kyle has very quick hands that aid him on his net play,” Prudoehl said.

Prudoehl is hoping the duo can get one of the top seeds at the conference tournament at N0. 2 doubles.

The Tigers will play again at 4:30 p.m. on Thursday at Mankato West.