Memorial services for Elizabeth Ann Baker, 75, of Albert Lea, will be at 2 p.m. Monday at Grace Lutheran Church. The Rev. Todd Walsh will officiate. Interment will be at Hillcrest Cemetery. Friends may greet the family from 4 to 7 p.m. Sunday at Bayview/Freeborn Funeral Home and one hour prior to the service at the church. To sign the guest book, go to www.bayviewfuneral.com. 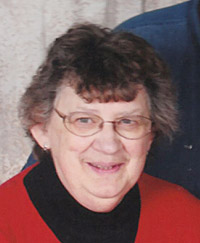 Elizabeth Ann Baker was born on July 19, 1936, on her grandparent’s farm near Kiester. The daughter of Robert and Barbara (Scherb) Woollard. Elizabeth and her parents lived in several different towns prior to moving to Albert Lea in 1942. She graduated from Albert Lea High School. On July 19, 1959, Elizabeth was united in marriage to Eldon G. Baker in the chapel at First Lutheran Church in Albert Lea. The couple moved to Faribault for a year and then returned to Albert Lea. They lived on Vine Avenue where they welcomed their two children. In the fall of 1966, they moved to the house on First Avenue where they still live at this time. Elizabeth worked at several locations thru the years, Coonrad’s Grocery, Boyd and Jack’s, stocking shelves in local grocery stores for Keebler and Nabisco and took care of the flowers around Trails Travel Center. Elizabeth has been a long time member of Grace Lutheran Church where in she served for the past few years on church council. She was also active in Grace Seniors as well as several Bible studies. Elizabeth enjoyed camping, traveling, sewing, crocheting, knitting and reading. She will be deeply missed by her family and friends.

Elizabeth was preceded in death by her parents; one brother; and numerous aunts, uncles and cousins.