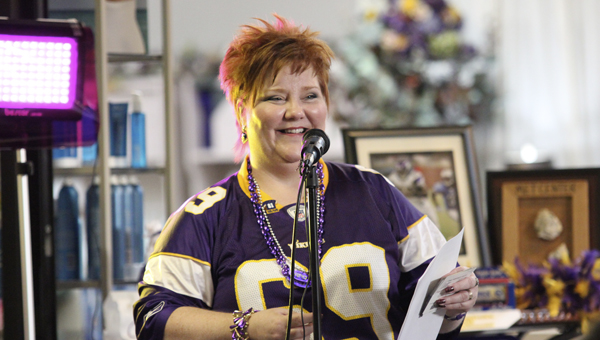 Kari Fjeldberg, owner of Classic Reflections Salon & Spa, leads a rally in favor of a Vikings stadium Monday evening at Northbridge Mall. In between speakers, she gave away gift cards for fans who answered trivia questions. -- Brandi Hagen/Albert Lea Tribune

About 40 people showed up at Northbridge Mall on Monday evening for a rally in favor of a stadium for the Minnesota Vikings.

District 27A Rep. Rich Murray, R-Albert Lea, stood before the Vikings fans and explained his no vote last April 16 in the Government Operations and Elections Committee, a 6-9 vote that triggered a nationwide concern over whether Minnesota would lose its NFL team next year. 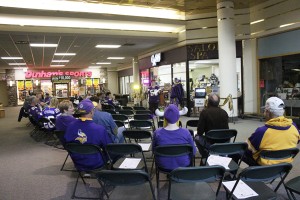 About 40 people showed up for a rally in favor of a pro football stadium for the Minnesota Vikings to play in. Some in attendance stood behind the chairs and weren’t visible here, but the many chairs did make the turnout seem low.

Murray said no bill is ever dead at the Capitol until the legislative session adjourns.

“So what I am going to ask you tonight is: Judge us on our end product, OK?”

Murray said he voted no because he didn’t feel the version of the bill before the committee had proper backup funding. He said if the anticipated gambling revenue didn’t materialize, the taxpayers would have been left with the bill.

The committee had five out of nine Republicans in favor and one out of six Democrats in favor.

He said more action toward getting a solution has taken place in the past week than in the entire legislative session, softening some legislators who had been stubborn on the issue.

“We don’t want to be the Legislature who was watching the gate as the Vikings went out the gate,” Murray said.

The rally was held outside Classic Reflections Salon & Spa in Northbridge Mall. Owner Kari Fjeldberg says she bleeds purple and has pushed Murray to support the Vikings. She had been angry at his committee vote, but they were friendly again Monday night at the rally. Murray drove down from St. Paul just for the event.

Murray said he has had many constituents and relatives press him on the issue, including his three sons, and said he heard from his brother-in-law the day of the vote. His brother-in-law has a garage adorned in purple and gold Vikings memorabilia.

Albert Lea Vineyard Church Rev. Matt Hundley was among the speakers at the rally.

He said he has seen people lose their jobs during the economic recession as the state economy has suffered. He said losing the Vikings would be yet another industry the state couldn’t save. He said sports teams draw people to the state and help the economy, in addition to giving the state a good quality of life.

He said he didn’t want the Minnesota Vikings to become another Baltimore Colts leaving for Indianapolis.

He said lawmakers “spend more time playing games rather than reaching across the aisle.”

He said the people of Minnesota want this stadium, “and it is up to our legislators to find a way to get things done.”

Dave Klatt of Dave Klatt State Farm Insurance said he has spent special moments at Vikings games with his children. He said he has relatives in Nebraska who are watching Minnesota to see whether the deal gets done.

“Fans in every state in the country would like to see a stadium deal done,” he said, ending his address with: “My God, I don’t want to see them in Los Angeles.”

Fjeldberg agreed that Albert Lea merchants benefit. Fans come through on the freeways to stretch their legs and refill tanks. Sometimes they come to the mall and even find their way to her salon.

She said it would break her heart if the Vikings moved to Los Angeles.