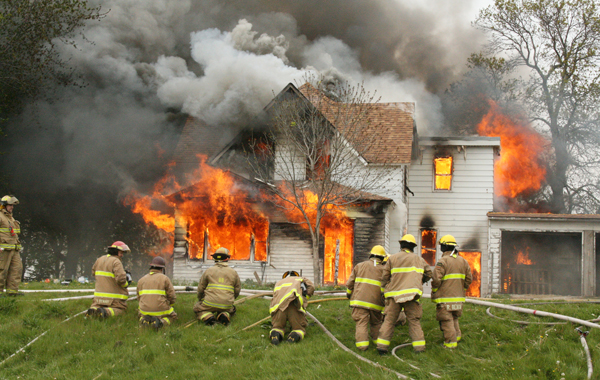 Firefighters watch as smoke and flames billow out of a house at 78742 170th St. Sunday afternoon. The house, donated by Greg Jensen, gave firefighters from three fire departments the opportunity to have hands-on experience at putting out house fires. -- Sarah Stultz/Albert Lea Tribune

During a training session at 78742 170th St., southeast of Albert Lea, firefighters from Albert Lea, Albert Lea Township and Glenville took turns starting fires, watching them grow and then extinguishing them.

The training took place at a house donated by auctioneer Greg Jensen.

He said it gives the younger firefighters on the departments the opportunity to learn without extra pressure and it also gives the chance for the equipment to be used.

They took part in about seven or eight scenarios, and then at the end of the day, the entire house was lit on fire.

The house was cleaned out ahead of time and any hazardous materials — such as window frames with asbestos — were disposed of separately.

Light said the last time there was similar hands-on training was in 2010. “We take every opportunity we can,” he said. “We’ve got the chance here, and we jump on it when we can.”

Light said firefighters can get all the training they want to through books and other methods, but until they get out and fight a real fire, it’s much different, he added.

He anticipated the next hands-on training to be later this summer.