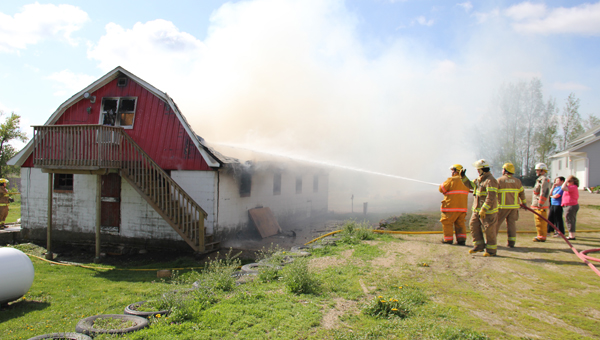 ALDEN — A combination barn and finished home office was a total loss Thursday morning after a fire.

The building was at 66104 225th St., three miles east of Alden. Homeowner Jennifer Jensen said the bottom part of the building housed dogs, cats and chickens and lawn equipment, while the upstairs was a finished office.

She said she thinks all the dogs and cats and some of the chickens escaped, but that a hen and 10 baby chicks likely didn’t make it out. Jennifer said she was worried her two daughters, Emily and Odelia, would be broken-hearted after finding out. 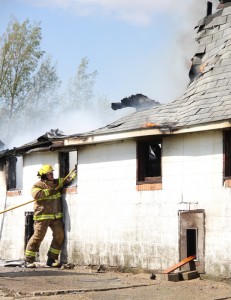 A combination barn and home office was a total loss after a fire Thursday morning. The building is on Paul and Jennifer Jensen's property about three miles east of Alden.

She and her husband, Paul, used the building as an office, but also stored many sentimental items there. She said Paul’s memorabilia and extra uniforms from his time in the Navy were lost and also their high school memorabilia.

“There was a lot of photographs and motorcycle gear, too,” Jennifer said.

Paul, who is a volunteer firefighter with the Manchester Fire Department, is away with the Navy Reserves, and as of Thursday morning she hadn’t been able to reach him to tell him about the fire.

Jennifer was the only one home and saw smoke and called 911. She said even though it felt like three days, firefighters responded very quickly. She spoke highly of those who responded saying they were very organized and knew what to do right away.
“It went really fast — it’s an old barn,” Jennifer said.

She estimated it was built in the 1960s, but wasn’t sure since the property hadn’t been in their family that long. Jennifer said she thinks they’ll rebuild. 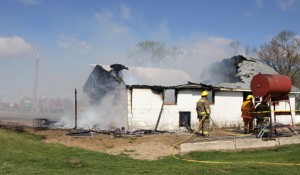 Firefighters were concerned about there being a gasoline tank and a propane tank near a building that burned Thursday.

Alden’s fire chief, Scott Seipp, said he’d be investigating the fire but didn’t immediately know of the cause. He said firefighters were originally concerned about the proximity of two tanks — one gasoline and one propane — by the building.

Seipp said it was lucky the wind was headed to the south away from the tanks, but that then they had to be worried about the house. The house and other buildings were not damaged, Seipp said. His other worry was having enough water, since the closest source was three miles away in Alden. They set up a pool of water and were sending trucks back and forth from Alden to get more.

Firefighters from Manchester and Freeborn left the scene around 11 a.m., but smoke was seen again around noon. It was ultimately extinguished.