Investigators are looking for juveniles for suspected arson

The suspected arson at the Albert Lea Family Y appears to have originated on the toilet paper roll and fixture in the boys’ restroom, according to investigators.

Albert Lea Fire Capt. Scott Hanna said police officers were following up finding a group of juveniles who were in the building just prior to the fire Thursday evening, but at this point there is no indication that the fire can be linked to them. He did not indicate whether the juveniles were boys or girls. 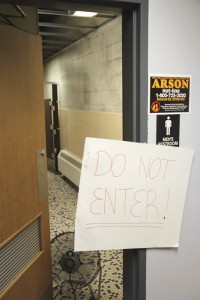 A "Do Not Enter" sign and an arson reward sign hang Friday on the door of the boys' restroom on the main floor of the Albert Lea Family Y where a suspected arson occurred Thursday night. -- Tim Engstrom/Albert Lea Tribune

“For any fire, regardless if it’s a $50 fire or a $50,000 fire, if it is in fact juvenile activity, we need to talk to those juveniles,” Hanna said. “Any time kids play with fire we want to talk to them just because we don’t want that to expand. The sooner we talk to them, the better.”

Damage was estimated at about $5,000. Dispatchers received a call at about 8:10 p.m. stating that fire alarms were going off and that there was black smoke coming out of the bathroom.

Albert Lea Family Y Director Dennis Dieser said the Family Y is open until 10:30 p.m. Alicia Peterson at the front desk called 911, and Dieser directed people out of the building. Meanwhile, John Judd grabbed a fire extinguisher at the front desk and put out the fire.

Maintenance staff Todd Brackey and John Cox invested much of their time cleaning up the restroom after investigators were finished inspecting the damage. That helped keep the burn smell from much of the building by morning. Having an all-concrete building helped contain the fire.

“It’s frustrating because we are here to serve the community,” Dieser said. “When people do things to hurt the Y, they are basically hurting the community.”

He said the Family Y is covered by insurance but was unsure how much of a deductible the nonprofit organization would need to pay. It recently has been working to upgrade the flooring of the exercise bay called the Spirit Mind Body Room and the organization has applied for grants to aid with other capital improvements.

The fire remains under investigation by the Albert Lea fire and police departments.

People providing information on this fire may be eligible for a reward of up to $2,500.